The Strange Race of John McHyde 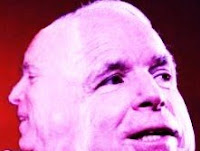 The 2008 Presidential race has gradually evolved from an historic high drama into a “high concept” mystery that would give the most adventurous Hollywood producer pause. The nomination of a biracial Senator was unlikely enough, but the twist of a split-personality warrior joining forces with an evangelical Hockey Mom on the competing ticket surely stretches credulity. Yet here we are, watching the latest Presidential Death Match blockbuster.

While elections certainly ought to be decided on the issues, the truth is that “undecided” voters – that crucial 10 to 15 percent who don’t pick a side until late in the race – often make their choices based on the personal qualities of the candidates. Sensitive to that, on the last night of the GOP convention John McCain portrayed himself as humble, respectful – even of his opponent, and open to “any willing patriot.” Speaking to an uncontrollable crowd that insisted on chanting USA no matter what he was saying, McCain promised that “change is coming.” Then he promised to get back to basics – lower taxes (for businesses), a strong defense, and a culture of life. At times, it sounded like he was reading a speech written for Reagan or some Bush.
There were a few specifics: school choice, cutting foreign aid, nuclear power, and oil drilling now. And some predictable villains: bureaucrats, unions, trial lawyers, partisan “rancor,” Iran and Russia. But the bottom line was that McCain has the scars to prove he’s a leader and Barack Obama doesn’t. “My country saved me and I will fight for her as long as I draw breath,” he said. “Fight with me.”

To understand the McCain-Palin phenomenon, it helps to look at some literary and cinematic precursors. On the surface, McCain looks like a maverick war hero, experienced and unassuming. But there’s another persona lurking beneath the surface, a creature unleashed by his ambition – the bitter, obsessed war lover who will say and do anything. The classic example of this tale is Robert Louis Stevenson’s 1886 novella, The Strange Case of Dr. Jekyll and Mr. Hyde.

In Stevenson’s original text, a London lawyer investigates strange occurrences involving his friend Dr. Henry Jekyll and the destructive Edward Hyde. It’s an early portrayal of split personality, a person who shows a dramatically different character from one situation to another. Today we call it "multiple personality" or "Dissociative Identity Disorder."

The premise, adapted in more than 100 films and a Broadway musical, is that the unassuming Jekyll invents a potion that turns him into Hyde, a sociopathic monster. He enjoys the creature’s moral freedom at first, but ultimately begins turning into Hyde involuntarily. Eventually, he runs out of potion and loses the ability to turn back into his original self. TV viewers, comic readers, and filmgoers are familiar with more modern versions of the character, including The Hulk, The Nutty Professor, and Harvey Two-Face from Batman. It’s the story of a flawed hero torn between a good and evil self.

In this new, real-life version, McCain began as a likable figure – a Vietnam-era Eisenhower. But he’s been turned by the potion – in this case, an unquenchable ambition to be president – into a post-9/11 Nixon. As a result of this metamorphosis, the war hero has become a war lover, the maverick has transformed into an opportunist, and the pragmatic public servant has become a rash demagogue. Not only has McCain adopted domestic policies he long opposed, he has pandered to the GOP’s conservative base, reversing himself even on the question of torture. It’s been remarkable (and terrible) to behold.

Unfortunately, Obama has assumed the role of Stevenson’s lawyer, trying to unravel the mystery and explain it to us. But in most adaptations, that character is dropped or sidelined so the drama can focus on Jekyll’s struggle with himself. Likewise, the current campaign, which was once mainly about Obama’s journey (“It’s his to lose,” the pundits said), is now more about McCain, his running mate, and his Party’s attempt to rise from its own ashes, somehow also transformed into agent of reform.

This adaptation also incorporates a love interest, a “partner and soul mate” – McCain’s description of Sarah Palin – with the apparent power to make the creature look like his former self. Think Beauty and the Beast. It was love at first sight, apparently. In TV terms, Team McCain has reformatted an old show with stagnant ratings by introducing a captivating unknown who has star quality and a resonant story. The potential for free media promotion is unlimited.

The backstory involves a beauty queen who was initially attracted to the wild side of politics, Pat Buchanan’s “culture war” and a secessionist movement in Alaska. But she drank some potion of her own and became a Republican mayor and governor. Like McCain, she can be winning, but also can change into a vindictive avenger if things don’t go her way.

In Palin’s case, a relevant film is The Stepford Wives, both the 1970s science fiction fable and the recent remake. The initial image that comes to mind is compliant robot-women (replacements for pushy high achievers) who serve their men. But you don’t want to cross them, since they’ve been programmed to vigorously defend their way of life. As the original film ends Katherine Ross has become one more Stepford wife; in the remake, Nicole Kidman escapes and the conspiracy is exposed.

Viewers weren’t impressed with the revisionist ending. As most people know, once body and soul have been surrendered you rarely get them back.

Calling Palin a Stepford Governor risks the charge of sexism. Republican operatives have been quick to charge Democrats and media analysts with precisely that for asking about her qualifications, researching her past, or questioning why she was put on the ticket. Yet, how do you describe someone who seeks to be a “heartbeat away” from the presidency and yet admitted a month ago that she didn’t know what the vice president does, a politician who presents herself as both a “hockey mom” and a “pit bull,” and thinks creationism is a nifty addition to the public school curriculum? What explains the combination of her extreme opposition to abortion and deluded assertion that she represents a completion of Hillary Clinton’s quest? Or what about her praise for Obama’s energy plan in early August and then deleting the press release from her website?

Somewhere between Wasilla and the GOP Convention Palin has morphed from a Buchanan culture warrior into the mom in The Brady Bunch.

Despite the general storyline, alternate endings still can be imagined. In Stevenson’s original, the conclusion was ambiguous. Jekyll might kill himself to escape from Hyde, but the outcome isn’t provided. Modern viewers are impatient with such cop outs. They’d prefer to see the creature prevail than leave the theater with such a large unanswered question.

It’s possible to envision a climax in which Obama finally confronts McCain. But to do that, he’ll have to go beyond eloquent explaining. In Act Three, we’ll need to see an all-out attack, one that begins with the assertion that Jekyll is gone and only Hyde survives. As the Republicans do so well, Obama must go directly after his opponent’s strengths and turn them into weaknesses. The challenge is to convince the undecided that he isn’t running against a maverick war hero and unselfish public servant; his opponent, he must show, is a bitter warrior, a rash and ambitious opportunist who poses a clear and present danger. The maverick, in short, has become a menace.

The best opportunity will come during the presidential debates. Continuing to pander with references to McCain’s Vietnam “courage” will effectively reinforce the prevailing storyline. Instead, Obama must goad McCain, refuse to give ground, and force the creature out. Since they can’t win on the issues, the Republicans want the race to be a personality contest. To win, therefore, Obama will have to expose who McCain really is. People need a glimpse of that famous temper, the guy who sometimes goes ballistic, holds long-term grudges and once publicly insulted his wife for teasing him about his thinning hair. This time, it’s the temperament, stupid!

For example, Obama might say, “I have the energy, judgment and a plan that can put American back on the right track. John McCain has a biography.” In other words, something designed to make him mad – because, to borrow a catch phrase, America won’t like him when he’s angry.

Otherwise, The Strange Race of John McHyde could end like one of those sci-fi films in which humanity survives (barely), but the hero dies and creatures continue to dominate the landscape. We’ve already had an early “October Surprise,” a provoked confrontation with Russia and new US missiles in Poland. The danger ahead is that Cold War/Terror logic will again be effectively force-fed to the fearful, who accept the idea that only McHyde can protect them.

The choice is between rejecting hope and hunkering down, or facing fear and standing up – to global challenges and the danger lurking within.

In case you’re wondering whether McCain’s temper is a real question, check out the video clips below. Three are MSNBC and CNN coverage of the issue, the fourth shows an incident during a Senate hearing last Spring.

Cursing at a Senate Hearing: C-SPAN