At the Ward 4 / 7 Neighborhood Planning Assembly mayoral forum last night, I announced my support for a resolution passed by the NPA Steering Committee requesting $5,000 a year per NPA to make small grants to community projects.

After the NPA resolution was passed at the group’s quarterly meeting on December 3, 2014, ALL candidates for mayor were asked by the Steering Committee to take a position of the issue. However, when the topic was raised last night, Mayor Weinberger and Steve Goodkind said nothing.
In 1976, as Burlington Youth Coordinator, I worked with the city’s Youth Council and the City Council to look for ways to coordinate programs and services. At that time the Council adopted a resolution that endorsed the concept of neighborhood assemblies. However, it took more than five years and a different mayor to achieve that.

Watch the Debate
At the start each NPA was allocated at least $15,000 to disburse. A large number of initiates were funded, from tree grates to bus shelters and play grounds. But funding gradually declined over the years, and ended completely in 2011. Today each NPA receives just $400, barely enough to cover meeting expenses.
As the NPA Steering Committee noted in its resolution, “de-funding of the NPAs has removed a vital incentive for citizen attendance and participation. When the NPA was a space for the discussion and possible funding of neighborhood improvements, there was a sense that one’s participation could meaningfully shape the future of the neighborhood.”
I agree with the group’s conclusion that small, high-impact grants via NPAs will both improve neighborhoods and revitalize these vital institutions. The amount of funding requested is modest and reasonable, but the impacts would be enormous.
The NPA request concludes by urging each candidate to consider the proposal and respond. Yet the mayor did not comment, and Goodkind focused instead on more administrative consolidation as his priority. I strongly disagree, and noted last night that the Progressive administrations he served centralized too much power in the executive branch, rather that decentralizing power and broadening participation.
Restored funding for NPAs is a small step in the right direction.
During the forum, I also supported two local ballot items – an advisory vote on non-citizen voting and participation on boards and other city bodies – called for raising the local minimum wage, and said zoning for the South End’s industrial/cultural enterprise zone that keeps it affordable for artists and other innovators should not be changed, as is currently being considered.
I again called on the city to become more involved in the future of 33 acres in the North End owned by Burlington College. This is also an issue for the Ward 4 / 7 NPA. At a recent meeting, the NPA asked for more accountability for funds expended to conserve land and open space, and the use of such funds to leverage conservation of the BC/Diocese fields for public use, as well as the other remaining open space, forest, waterfront shoreline, and historical areas on the site.
Mayor Weinberger and Mr. Goodkind also chose to say nothing about that.

Campaign Announcement: Greg Guma, January 27,
Two months ago, I began to look seriously at the race for mayor – the only public official elected citywide in Burlington -- attending meetings, meeting with community leaders, seeking counsel from friends. Some urged me on, but others wondered why anyone would consider such a thing, or suggested approaching the Progressive Party. 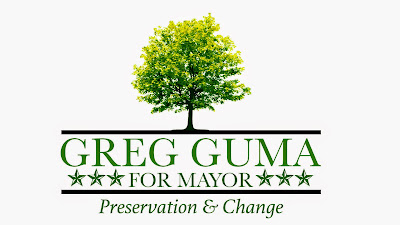 Entering the Race: https://www.mynbc5.com/article/a-independent-voice-jumps-into-burlingtons-mayoral-race/2818855
Once upon a time in Burlington, I was part of the movement that put progressives in power here. I ran twice myself for the City Council, as a Progressive and Democrat. But that was decades ago, and things have changed. In any case, Progressive Party leaders united behind Steve Goodkind, so the question became whether to run anyway. I waited, and listened, for about a month – and basically heard nothing.

What I mean is, nothing of consequence about the fast-tracking of various projects developing across the city – from the threat of another commercial center replacing a North End mobile home neighborhood to the looming, intensive development of 33 acres of irreplaceable open space owned by the financially-strapped Burlington College…
Nothing too about troubling, proposed zoning changes and gentrification plans in the South End that will drive out the innovators and artists who make the city special, and certainly nothing about low-key planning for another major hotel, this one right at the water’s edge. That project, hidden under the label “adaptive reuse and infill,” is reluctantly acknowledged on page 108 of a 113-page pitch known as PlanBTV.
Supporters urged me to reconsider, and more than that, they took to the streets and public events to see how others felt and collected enough signatures to place my name on the ballot as an Independent Candidate. In less than two weeks they did it. I am humbled by the support and ready now to give it my all.

Burlington's Open Space Summit, convened as an all-wards Neighborhood Planning Assembly (NPA) meeting by SOS-Burlington, is a time for residents from across the city to gather and discuss how to save open land in the city, how growth can happen while conserving essential green space.

The proposed sale of the 32 acres presently owned by Burlington College for development into intensive mixed housing has aroused significant community opposition. The idea of filling one of the largest undeveloped waterfront green spaces in the city with houses, condos and apartment buildings and therefore necessarily with pipes, electric wires, driveways, roads, and cars does not work for Burlingtonians who have a vision of the city as a verdant community, accessible to all, embracing nature and able to contribute to local food production.

The development of the Burlington College land, as proposed, conflicts with Burlington's 2014 Open Space Protection Plan, the city's Climate Action Plan, and its Municipal Development Plan. It threatens fragile plant communities of state and local importance identified 14 years ago in a city-sponsored report.  It does not help solve the significant stormwater runoff problems the Department of Public Works is wrestling with. It interdicts wildlife corridors between the Intervale and Lake Champlain. It puts new demands on existing municipal infrastructure that is already overburdened. It will restrict or close access to a parkland used by Burlington residents over many years for walking, gardening, sledding, skiing and viewing Lake Champlain.  It contradicts the city's commitment to the preservation of open space as essential to a livable city.

“Burlington has always voted for public land that is kept 'green' over that which is developed for private use.” said Diane Gayer, local architect and key convener of the group Save Open Space-Burlington. “We thrive as a city because we are willing to support municipal investment, but not at the expense of our common assets.”