“It is better to live one day as a lion than 100 years as a sheep.” – @realDonaldTrump #MakeAmericaGreatAgain" - Trump quoting and retweeting Mussolini, Feb. 28, 2016

Doremus Jessup could see it coming: a day when freedom, constitutional rights and truth itself would be lost in the United States. In Sinclair Lewis' 1936 novel, It Can't Happen Here, the Vermont country editor watches aghast as a racist, flag-waving demagogue wins the presidential election and establishes a repressive regime much like Nazi Germany. Soon the most liberal members of the Supreme Court resign, only to be replaced by unknown lawyers who call President Buzz Windrip by his first name.

At the time few people heeded Lewis' satirical warning, even though fascism had already come to Germany and Italy, and was about to be embraced by high-ranking officers in Japan. Western appeasement and indecision continued as Mussolini took control of Albania, Ethiopia and Eritrea, and as Hitler repudiated the Versailles treaty, instead setting up pacts with the other two Axis powers.

The tyranny imagined by Lewis didn't take hold in the US during the World War II years. But a more subtle form, what philosopher Bertram Gross named "friendly fascism," has been developing for decades. We're seeing its most recent manifestation in the media-fueled campaign of Donald Trump. It's a brutal nationalist approach to politics and governance.

If it fully emerges, a post-modern friendly fascism won't necessarily require complete control by the extreme right. It could emerge instead from within the "establishment" as it responds to crisis in an embattled capitalist world. And like the residents of Fort Beulah, Vermont who couldn't heed the warnings, we may well remain disoriented spectators until it is too late, under-estimating the threat as well as our own power to resist a grinning despotism.

Big business and big government. Together they have built the international establishment -- that elite club of corporate top dogs, CEOs, billionaires, and their favored friends -- from which some form of fascism could emerge. Since World War II its gatekeepers have befuddled the public with a series of false assumptions and myths. For example, we have constantly been told that communism and socialism are so dangerous (when they aren't totally bankrupt, of course) that they justify repression and a massive military to prevent the infection from spreading. There has also been a persistent effort to convince us that capitalism is based on competitive free enterprise rather than corporate and monopoly power, and that powerful economic entities don't really control markets and entire economies. When that fails, we hear that capitalism is about to be replaced by something new -- from the consumer society to the digital age. Choose your illusion.

Government-business symbiosis was already underway during the Carter and Reagan years, with the radical right increasing its reach since Reagan's time. But the deeper change has been a movement to the right by the ultra-rich. By 1984 the evidence included draconian federal criminal laws, politically-motivated Grand Juries, union-busting, arbitrary classification of information, purges and surveillance, and the gradual transformation of basic rights into privileges.

It was obvious decades ago that "terror" does not only come in the form of overt violence. The withholding of privileges or rewards by a powerful state can also be effective. Deep fears can meanwhile be fed by inflation, deficits or unemployment, job insecurity or nuclear anxiety. To name just a few.

Along with the Reagan administration's merging of big government and business came an open-ended commitment to military "superiority"  and increased concentration of wealth at the top. Uncle Ron was, after all, a career spokesman for corporate America. But Jimmy Carter and Bill Clinton were no saviors, just friendlier faces. Without a clean break, the choices are always limited.

Still, there are signs of hope, trends deeper than the outcome of one media referendum known as a presidential election. There are promising movements, along with sporadic surges of participation and slow-but-steady progress toward a more democratic social order and economy. Most such grassroots uprisings share a disgust for elitism and waste, a suspicion of bureaucracy, and an enthusiasm for participation, accountability and real productivity.

The current encounter with fascism may be unavoidable. It definitely feels like a possibility. But the best way to resist and change the outcome is to hold onto realism, skepticism, imagination and our aspirations for a better world. We don't need to settle for the narrow definitions of freedom, diversity, democracy and rights. And we certainly don't need to trade off the pursuit of happiness for the false security of "law and order."

It is still possible to envision a society in which people control their government and economy rather than the reverse. What we need is to keep a hopeful vision in sight while rejecting the friendly fascists at our door. 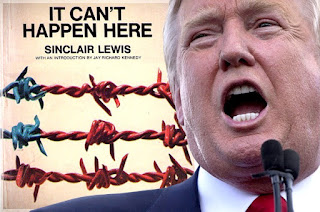