The race didn't look serious at first. Democrat Gordon Paquette was running for an unprecedented sixth term as Burlington mayor. Restaurant owner Richard Bove had opted for an Independent bid after losing the caucus. Joseph McGrath, a relative unknown, was also in the race as a Northender concerned about crime. And former Liberty Union candidate Bernie Sanders was piecing together an Independent coalition.


The 1981 ballot was crowded: a referendum on waterfront access, a nuclear freeze advisory vote, and a 10 percent property tax increase, among other items. But Paquette blocked an article asking voters whether to separate two road projects -- the northern and southern connectors -- so that the northern route could be finished first. A Fair Housing Commission proposal was delayed at the last minute, with the promise of a special election later.

On March 3, things turned out differently than anyone predicted. After rapidly gaining credibility, winning neighborhood allies and receiving the police union endorsement, Sanders squeaked to victory. But he hardly knew a soul in City Hall and would have just two allies on the City Council.

His campaign literature urged, "It's time for a change." At his first post-victory press conference, he added, "No more boring meetings."

Month One: The Pomerleau project for the waterfront came under fire as the new mayor took office in April. The Council meanwhile declared a hiring freeze due to the defeat of the local tax increase, and two different housing commission items were placed on a special election ballot.

Sanders set up task forces to develop ideas and used a personal braintrust to look for ways out of the fiscal bind. Most councilors were cool to this new presence in city government, and greeted him in early April by firing his new secretary because he had failed to go through the proper channels. She was soon reinstated.

May-June -- Confrontation Politics: Although Sanders had run on a "no tax increase" platform, he found that a five percent increase was the best he could do. It was one of the few times that he and the Council majority agreed. On Reorganization Day, they even parted company on his nominees for key city posts, initially rejecting future City Clerk James Rader and Assistant City Attorney John Franco -- without asking for their qualifications. For Sanders this was an obvious sign that the Council planned to stonewall his administration.

In late April, the two housing initiatives were both defeated, largely thanks to a scare campaign, funded by local landlords, that brought in California consultant Bernie Walp. Despite demands from neighborhood groups the Planning Commission was sticking with its municipal development plans. Further fueling divisions an anonymous publication, The Flea Press, covertly circulated slanderous commentary through official channels.

Eventually, the Council did approve two Sanders appointments, Steve Goodkind as Health and Safety Director, and David Clavelle as head of Civil Defense. But Sanders would have to keep working with key Paquette aides like Frank Wagner and Lee Austin.

Summer -- Digging in: Bernie was making a name for himself with TV appearances, print features, even a July 5 Doonesbury strip. At home his biggest success was organizing a series of successful concerts in Battery Park. Meanwhile, he began a dialogue with the university and hospital officials and testified against a 30 percent Blue Cross rate hike. He also learned enough about the proposed McNeil wood chip plant to support its construction -- despite the arguments of environmental activists.

A campaign to organize retail workers was launched, toxic muck in the barge canal blocked progress on the southern connector, and the city's urban renewal developer demanded (and received) a property tax break based on citywide appraisal inequities. Sanders actively supported the retail workers drive, especially when a local lawyer began advising business owners on how to combat unionization. Both the campaign and opposition eventually faded away.

Sanders was becoming effective but clashes with the Council majority persisted. By September his allies were busy planning a strong challenge in the next Town Meeting Day council races. His two supporters on the City Council -- Independent Sadie White and Terry Bouricius, who had won as a Citizens Party candidate -- needed more allies.
Fall -- Before the storm: Although voices were lowered, the City Council's monthly budget review remained a challenge to the patience of all involved. The Flea Press vanished once its author, pollster Vincent Naramore, was discovered. But the atmosphere in City Hall was still tense.
In September Sanders unilaterally appointed his partner Jane Driscoll as Youth Coordinator, a new "volunteer" position that would be funded by having Driscoll seek money from foundations and grants.

Near the end of the year a questionable letter by City Clerk Wagner raised new questions about the funding of the southern connector. Meanwhile, a voter registration drive by the Citizens Party and Sanders supporters prompted the Voter Registration Board to impose new restrictive rules. Campaign '82 had begun.

Council Upset: Citizens Party and Sanders backers formed the Coalition for Responsible Government to develop a unified slate of candidates. The result was a crop of Council and School Board hopefuls that covered every ward, plus more competition for minor offices than the city had ever seen.

Local election experts doubted that Rik Musty and Zoe Breiner could defeat incumbent Democrats Joyce Desautels and Russell Niquette. But the Council majority had alienated voters by blocking Sanders; "give the mayor the chance to do his job" became a persuasive campaign theme. Over 100 volunteers canvassed the city with tabloid newspapers and staged an impressive get-out-the-vote effort.

Days before the election the Superior Court ordered the Voter Board to add all newly registered voters to the checklist. In Montpelier, an attempt to revoke Burlington's right to impose a Gross Receipts Tax turned into a "home rule" victory and PR plus for the Sanders team.

When the votes were tallied, there were now five Sanders supporters on the Council, along with five Republicans. After the runoffs, the Democrats were left with just three votes and Sanders had the ability to sustain a veto.

A New Broom: Tax reform had been Bernie's promise. In 1982 he tried to deliver. But his Gross Receipts proposal was narrowly defeated in June, again thanks to consultant Bernie Walp.

The city's new treasurer Jonathan Leopold and his assistant Barr Wright (later Swennerfelt) phased in a cash management system, central purchasing, and other innovations that improved the local financial picture. City Clerk James Rader started a city-sponsored voter registration drive. Housing inspection picked up and the mayor set up an economic development committee that included business leaders and his own people.

Some Democrats remained unimpressed. Writing to Rutland mayor John Daley, State Senator Thomas Crowley warned his colleague to "watch this group from Burlington." Opposition to the southern connector was just a front, Crowley wrote, and "they have apparently targeted Rutland as Bernie Sandersville number 2."

Nevertheless, the Sanders administration was not turning out to be the radical regime predicted. Instead, Sanders was courting city workers, a move that angered many department heads. And he was opening City Hall to various groups that hadn't previously been welcome. Workers' Pride Week in late September was an attempt to increase the self-respect of working people. In general, however, Sanders' team spent its greatest effort refining city management and saving money.

More progressive initiatives were proposed, things like rejection of crisis relocation planning, establishment of neighborhood assemblies as advisory bodies on matters such as community development, and contributions from tax-exempt institutions like UVM. The Council sometimes agreed, at least in principle, realizing that too much obstruction was not in anyone's best interest.

Toward the end of 1982, as people began to focus on the next mayoral race, Sanders announced that his team had discovered a $1.9 million surplus. Auditors were hauled in for a special Council session. The surplus turned out to be real. It had been growing for years without official notice.

Not much was happening on the waterfront. Pomerleau and friends were backing off their plans due to public skepticism. But Sanders' proposal to implement interim zoning under Council control failed to win GOP or Democratic support. The mayor had successfully blocked the condo and hotel plan, as promised, but no alternative had emerged.

In less than two years local politics had been transformed. Burlington had a three-party system -- with some hazy dividing lines. Some Democrats were moving into the Republican camp, others were supporting Sanders programs or the mayor himself. Hundreds of people were participating in various councils and neighborhood meetings. And the whole state watched with increasing fascination.

Sometimes Council sessions were still boring, but not often, and especially not once the electoral battle for City Hall began again. 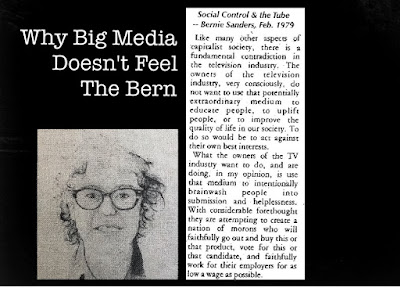