THE function and impact of television on our society cannot be adequately discussed in a few pages. All that this article can do is to raise a few basic points and, perhaps, stimulate discussion on a subject which has not received the critical examination it deserves.

There are several major functions of commercial television as it presently operates. First, it is supposed to make as much money as possible for the owners of the industry and for the companies who advertise. Second, like heroin and alcohol, television serves the function of an escapist mechanism which allows people to "space out" and avoid the pain and conflict of their lives -- and the causes of those problems. Third, television is the major vehicle by which the owners of this society propagate their political points of view (including lies and distortions) through the "news."

The major networks are owned and controlled by some of the most powerful institutions in this country. In 1974, the U.S. Senate Committee on Government Operations reported that the Chase Manhattan Bank was the largest stockholder in CBS and NBC and the third largest at ABC, behind Bankers Trust and Bank of New York.

The television industry earns huge sums of money because it can demand, and receive, extraordinary rates for advertising time. The companies pay the price because television is (to say the least) extremely effective in selling products -- be they underarm spray deodorants, automobiles, beer, cat food, politicians, or whatever. Using the well-tested Hitlerian principle that people should be treated as morons and bombarded over and over again with the same simple phrases and ideas, the astute minds on Madison Avenue are capable of converting millions of TV viewers to one or another product in a matter of months.


WHAT is the relationship between the kinds of programming that appears on commercial TV, the advertising that appears on TV, and the goals of the people who own the networks? Is it possible, as some people believe, that commercial television can be significantly improved without fundamentally changing the ownership and control of the networks -- for example, by taking them out of the hands of the banks and giant corporations who presently control them?

Could Alpo Dog Food, Close Up Toothpaste, Ford Motor Company, or Coca-Cola present programming which attempts to allow Americans to understand the world that they are living in, and provide ideas as to how the world could be significantly improved?

Like many other aspects of capitalist society, there is a fundamental contradiction in the television industry. The owners of the television industry, very consciously, do not want to use that potentially extraordinary medium to educate people, to uplift people, or to improve the quality of life in our society. To do so would be to act against their own best interests.

What the owners of the TV industry want to do, and are doing, in my opinion, is use that medium to intentionally brainwash people into submission and helplessness. With considerable forethought they are attempting to create a nation of morons who will faithfully go out and buy this or that product, vote for this or that candidate, and faithfully work for their employers for as low a wage as possible.

A recent study has indicated that the Scholastic Aptitude Test results of high school students has declined precipitously over the last decade. Teachers throughout the country complain that many of their students are unable to read or concentrate for any length of time on a concept. There is almost no American politician alive who would dare give a 30-minute speech on TV for fear of boring his/her audience, and the 30-second "spot" us the major means by which candidates convey their weighty political analysis of the world situation to the voters. (In fact, some TV stations will not sell a political candidate more than a 60-second block of time.)

NOT too surprisingly -- given the nature of the medical and psychiatric establishments -- very little attention has been given to the psychological damage that constant advertising interruptions have on the capacity of a human being to think. If one is watching an hour-long program, of whatever kind, and one's thought pattern is interrupted 20 or 30 times within an hour by totally separate concepts such as talking cars, feeling free with Coke and Pepsi, improving your sex life with Close Up Toothpaste, getting relief from hemorrhoids, donating money to wipe out cancer, doing away with bodily odors, getting whiter washes, etc., etc., etc. -- what happens to the ability of the mind to think, to concentrate, to analyze?

Could one conceive of a serious program -- something which reflects real life and is produced in order to have an impact on people -- being interrupted every seven minutes by moronic commercials? Obviously not. People would be totally incensed, just as they would be if they were involved in a serious conversation which was constantly interrupted by extraneous noise.

If the television industry encouraged intellectual growth, honesty, and the pursuit of truth, it would put most major corporations out of business. Most advertising consists of lies designed to sell products which are either identical to the competition, totally useless, grossly overpriced, or dangerous to human health or the environment. The last thing that the owners of the TV industry would want is for people to know the truth about the products sold on the air

"Good evening. I hope that you will buy Coca-Cola. Although we sell a bottle for 50 cents it only costs us 5 or 6 cents to manufacture. In addition, Coke is guaranteed to rot your teeth, and upset your stomach. In large amounts the high sugar content can affect your brain functioning."

"Good evening. We hope that you will buy X automobile. We sell it for ten times as much as it costs to produce and, in addition, have built it so that it will break down in a few years time so that you'll need another one real soon. Furthermore, we have  converted the men who built the car into assembly line machines, and have seriously polluted the city in which it is manufactured.

"We have also created a situation in which incredible amounts of energy are consumed in one of the least efficient forms of transportation imaginable.

"Rush out and buy X automobile. Don't wait another day."


THE potential of television, democratically owned and controlled by the people, is literally beyond comprehension because it is such a relatively new medium and we have no experience with it under democratic control. At the least, with the present state of technology, we could have a choice of dozens of channels of commercial-free TV.

At the moment serious writers are, by and large, not allowed to write for commercial television for fear they might produce something that is true and hence, upsetting to the owners of the media. Under democratic control people with all kinds of views could make their presentations, and serious artists would be encouraged to produce work for the tube.

There is no question that television has an enormous impact upon our society, and that the controllers of that medium have far more power than almost any politician. For those of us who are concerned about living in a democratic and healthy society, it is necessary to address the control of television as a political issue, and organize to win.
Posted by Greg Guma at 5/29/2015 07:00:00 PM No comments:

A serialized examination of Bernie Sanders
and Vermont's progressive movement

In 1989 The People's Republic: Vermont and the Sanders Revolution described the rise of Vermont's progressive movement. But many things changed after Bernie Sanders moved onto the national stage, while new economic and political challenges created pitfalls. Putting Burlington's situation in a larger context, this sequel also explores the impacts of the Occupy movement, the struggle to overcome the Supreme Court's Citizens United decision, and other challenges. But the main focus is Sanders' recent years and the hotly contested mayoral race in which developer Miro Weinberger beat Republican Kurt Wright and Independent Wanda Hines. 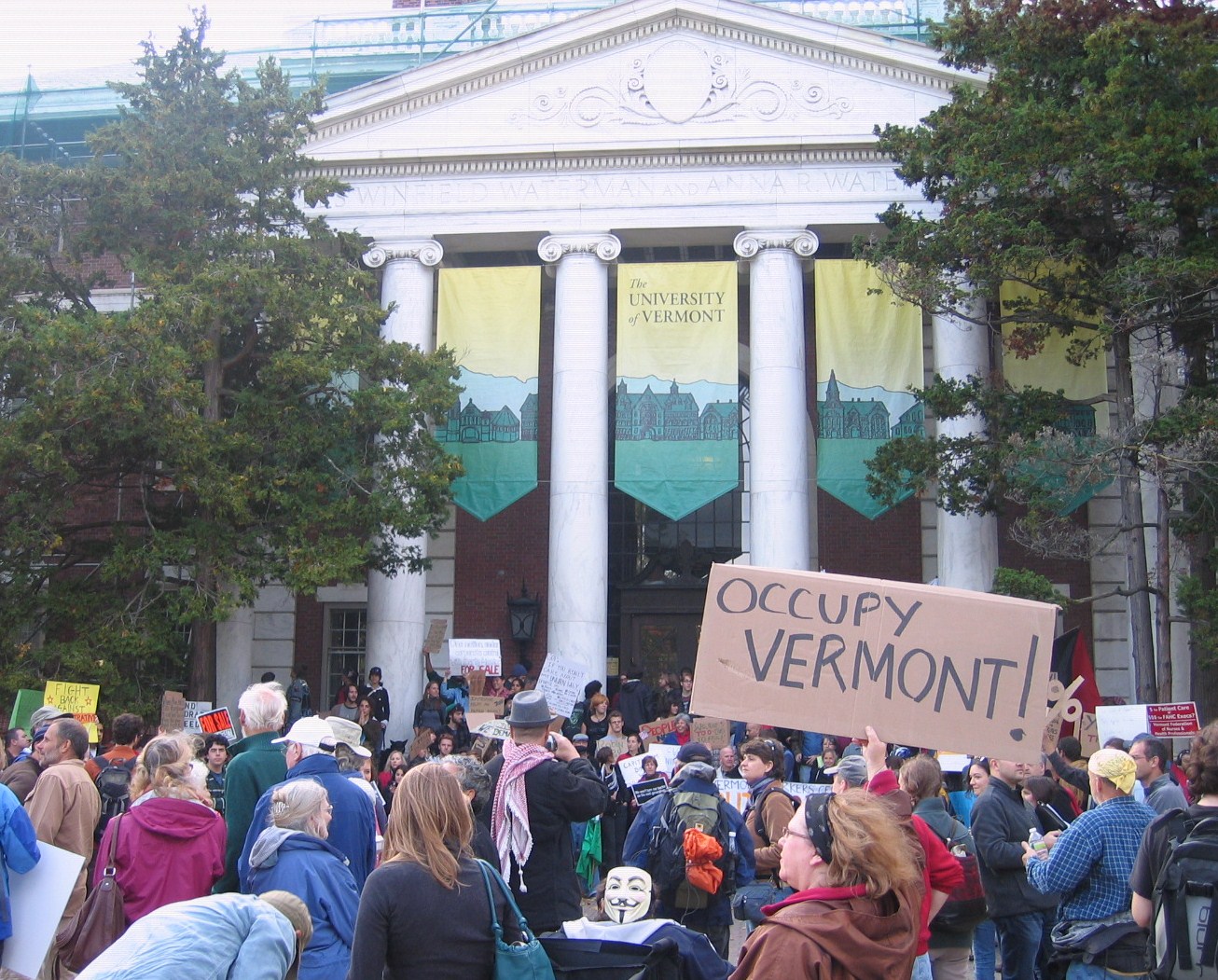 Progressive Eclipse takes a closer look at why progressives found themselves on the defensive despite a record of success. It also examines the decision by Sanders and Mayor Bob Kiss to invite military contractor Lockheed Martin to Vermont and other problems that emerged after Burlington launched a municipally-owned cable TV and fiber optic system. Revisiting several Progressive administrations, it chronicles the twists and turns that led to Sanders' presidential run and Weinberger's local victory. New material is released weekly. This week, Chapter Ten: