Battling Bernie Has Never Been Easy

"Win Some, Lose Some," Chapter 20
The People's Republic: Vermont and the Sanders Revolution
By Greg Guma 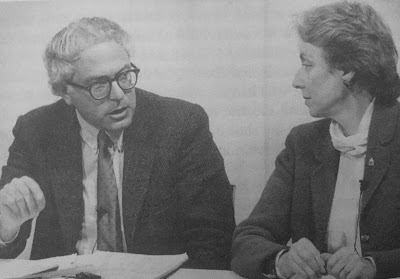 Madeleine Kunin was offended. She was being judged unfairly, she told the reporter from the Village Voice. Along with dozens of other writers, James Ridgeway was looking for insights into the race between Bernie Sanders, the Vermont "neosocialist," and Kunin, the "neoliberal."

The governor protested this classification. "You can't have the strategies that were true in the 60s or even 70s: simply spending money," she explained. "You've got to be accountable for every cent. You have to leverage the private sector and get them involved... I consider myself to be in the mold of governors like Dukakis, Cuomo, and to some extent Robb who is more conservative."

It was vintage Kunin -- cautious and firmly in the middle of the road. For years already she had lived with the nickname Straddlin' Madeleine and had learned to make the best of it. Elected a state representative, she proved herself as a strong chairperson of the House Appropriations Committee and defeated Peter Smith, Vermont's preppy Republican version of Robert Redford, to become lieutenant governor. After four years in Governor Richard Snelling's shadow, she challenged him in 1982 in her first gubernatorial run and lost.

But Kunin didn't straddle when it came to setting goals or building a personal organization. In the 1984 election, with Snelling temporarily retired, she squeaked into office over Attorney General John Easton, becoming Vermont's first female chief executive, and began to set her own agenda.

In many ways, Kunin was an archetypal moderate: she favored social programs but fiscal conservatism. To progressives, her support of feminist and labor issues seemed weak and equivocal, yet she used her first term to bring women into state government and to prove, just as Sanders had done in Burlington, that being different -- in her case, female -- didn't mean she was incompetent. When it came to keeping the state in sound financial shape or protecting water quality, she could be as strong as Sanders and Snelling.

But Kunin was no world-shaker. She shied away from raising the minimum wage or demanding that corporations give notice before closing down plants. She wanted nuclear plants to be safe, but she didn't think they should be shut down "overnight." In the estimation of Sanders and his Rainbow backers, Kunin was just another "lesser evil"; supporting her would not be worth losing the chance to expand the Progressive base. If a Sanders run meant that Smith would be elected, so be it -- he would be only marginally different from her.

"If you ask her where she stands," said Sanders of Kunin, "she'd say, in the middle of the Democratic party. She's never said she'd do anything. The confusion lies in the fact that many people are excited because she's the first woman governor. But after that there ain't much."

Kunin was not much kinder to her socialist opponent. "I think he has messianic tendencies," she told Ridgeway. "That's not uncommon in politicians. But it does mean he dismisses everyone else's alternative solutions... His approach is always to tear down. But I think you can make progress and change for the better by working within the structure... A lot of what he says is rhetoric and undoable... He has to create a distinction between us, and to do that he has to push me more to the right, where I really don't think I am. I don't think it's fair. He's not running against evil, you know."

The third player, Smith, had some kind words for Kunin. "She's a good person," he said, "she's got some commitment." But he also felt that she was a case of "vision without substance." In Sanders, Smith saw passion, confusion, and noise. "If Bernie were as gutsy and honest as he says he is, he'd run as a Socialist," charged the Republican. "He is a socialist! That's why he went to Nicaragua.That's why he goes to Berkeley."

But if Sanders was a noisy neosocialist and Kunin was an empty vessel, what did that make Smith? He had begun his career as an educational reformer, launching Community College of Vermont. But his liberal leanings didn't prevent him from joining the Republicans; he supported first Bush, then Reagan, in 1980. He was intelligent and a creative thinker, and yet willing to play the compliant foot-soldier in Reagan's conservative revolution.

Kunin didn't view either of her opponents as devils, but she was concerned about how to survive the campaign, particularly the series of public debates that would give Sanders his best opportunity to win more votes. On the podium, she realized, nobody in Vermont did it better than the mayor.

Her press secretary, Bob Sherman, contacted me early in the summer. He knew I wasn't in Sanders' camp this time, and he wondered whether I would be available to help Kunin prepare for her debate ordeal with a rehearsal. The idea was to stage a mock debate between the governor and stand-ins for her two challengers. Would I be able to "play" Bernie? The offer was irresistible.

We met in a Montpelier "safe house," accompanied by key staff members. Democratic legislator Peter Youngbaer had prepared himself to be Smith; I had reviewed recent Sanders speeches and tried to unravel the magic of his style. With a video camera recording our face-off, we tackled environmental, tax, and development issues. Kunin's problem, I discovered, was her preoccupation with details. She often answered questions by trying to explain the thinking that led to her policy choice rather than by simply taking a strong stand. Bernie's strength, in contrast, was his ability to turn any question to his own advantage -- even if that meant ignoring it -- in order to get his point across.

In the end I summed up with some classic Sanderisms. "In my view, the Reagan administration has been a disaster for Americans," I barked. "We are planning to spend a trillion dollars on Star Wars and hundreds of millions to overthrow the government of Nicaragua while, in Vermont, we don't have enough money to adequately fund education or social services. That has to change.

"The other candidates think we can just say a lot of nice things and tinker here and there to make everything okay. I don't. I believe we need fundamental change, and that the governor of Vermont should be leading the fight. We can be the conscience of the nation. We don't have to settle for Reagan's insanity or the indecision of the Democrats."

Afterward, when Kunin saw her image on the screen, she was a bit shaken. "Sanders" and "Smith" had won some points, while she had been tedious and indecisive. Yet she balked at the suggestion that she challenge Sanders if he went on the attack, arguing, "He's not the enemy."

To support Kunin over Sanders was, of course, progressive heresy. Even  those who felt he was authoritarian could see no reason to support his Democratic opponent. As labor organizer Ellen David-Friedman put it, "Challenging the system is considered a better goal than maintaining the status quo."

Queen Madeleine, Preppie Peter, and Lord Bernie -- the nicknames created by columnist Peter Freyne were apt descriptions of Vermont's new political royalty. Each was an established star with a proven popular base. But Sanders' early boast that he was "running to win" was soon revised by his campaign organizers. A July poll put the Lord of Burlington at a mere 11 percent statewide, while the Queen, also a Burlingtonian, had 53, well outdistancing Preppie.

By October, the Sanders campaign, if not the candidate himself, had lowered its sights to seeking a respectable 20 percent. Within his organization, feelings were frayed and hopes disappointed. Writing in the Guardian, a radical newsweekly, Kevin Kelley explained that even David-Friedman, who had managed the campaign for several months, felt it hadn't become a grassroots movement. "Bernie had trouble," she said, "recruiting activists and contributors who had been involved in his previous campaigns. Some of them felt it was the wrong race to be running, and others thought it was more important that he stay in Burlington to consolidate the gains we had made there."

She also noted that "middle-class progressives" weren't enthusiastic since Sanders wasn't organizing but simply running. "Bernie acts in a way that's similar to [Jesse] Jackson in terms of focusing more on a candidacy and less on an organization," she felt. She was still committed to his campaign, but she acknowledged his limitations. In a public letter to the left two weeks before the election, she praised Sanders' leadership but scored his resistance to accountability or organization.

Murray Bookchin, a libertarian socialist thinker and leader of the emerging Green movement, was more blunt. "Bernie's running a one-man show," he said. "The only justification for a socialist campaign at this point is to try to educate people, and Sanders isn't doing that at all. Instead, he's running on the preposterous notion that he can get elected as governor this year."

In truth, however, Sanders was running on issues as well: reducing reliance on the property tax, a more progressive income and corporate tax system, lowering utility bills, raising the minimum wage, and phasing out Vermont Yankee, among others. It was basically the same thrust he had always pushed -- redistribution of income and wealth. But neither his reform program nor his powerful speaking style were enough to overcome the barriers in his way. His opponents could still outspend him, and his own ranks were split.

Working with Patrick Leahy, who was fighting Snelling to keep his US Senate seat, Kunin staged an impressive get-out-the-vote effort. It was the most sophisticated voter-identification program in state history. With unemployment at a record low and no state deficit, she had economics on her side. On Election Day, Kunin failed to win 50 percent of the vote, but she left both her opponents well behind and was dutifully confirmed by the legislature.

Sanders came away with 15 percent -- far less than he had been hoping for, but nevertheless remarkable. Running as an Independent, he had established a solid base, and his percentage was far too big to be simply a protest vote. But it wasn't just the total that was significant, noted Chris Graff, Vermont's Associated Press bureau chief. "It is the fact that it came from the conservative hilltowns, the Republican strongholds, the farm communities." Sanders had, in fact, won his highest percentage in the conservative Northeast Kingdom. Once again he had touched a chord and transcended traditional lines.