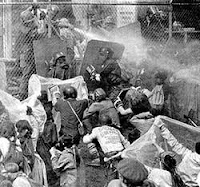 My weekly column for the Vermont Vanguard Press, cheekily titled “Immediate Release,” offered interviews and ongoing stories. In cover features I meanwhile tackled complex topics like privacy and the growing dossier industry, environmental threats, and the struggle within the Vermont court system over the role of Side Judges, a unique system of county judicial power via non-lawyers. For human interest I profiled towns, creating word pictures of people and Vermont ways.

That June, I returned to the anti-nuclear movement. In 1978 the Clamshell Alliance was at a crossroads. A legal rally had been held near the nuclear construction site, a shift away from civil disobedience that allowed over 15,000 people to gather peacefully. But some Clams felt that the spirit and process of the organization was being undermined. They also had evidence that it was under surveillance and possibly infiltrated. At a conference in New Hampshire, suspicion flowed powerfully beneath the surface. My article was called “Clam Watching.”

Many Clamshell members supported "public control of energy" through municipal energy groups. But some saw the goal as simply "Stopping Seabrook" or building momentum for action on related issues like the mysterious death of nuclear safety researcher Karen Silkwood. Others viewed the organization's central mission as internal, things like developing "a nonviolent lifestyle," building networks, "fostering love of the earth," and "local communication." A few urged national lobbying, while still others suggested that the Alliance help build "a world base for socialism."

By the end of the weekend much had been shared, but "consensus" on the big issues was elusive. One area of agreement was public action that November to commemorate the mysterious death of Karen Silkwood. A case against Kerr-McGee was in the Oklahoma courts, where lawyers for the Silkwood family charged that she had been under surveillance and the FBI conspired to suppress evidence of spying. Silkwood lawyer Dan Sheehan claimed that a national spy ring was involved in illegal surveillance of anti-nuke activists like Silkwood, and mentioned links between the FBI, CIA, the federal Law Enforcement Assistance Administration (LEAA) and the quasi-private Law Enforcement Intelligence Unit (LEIU).

The charges weren’t far-fetched. Since 1974, surveillance, harassment, and infiltration of nuclear power opponents had been deemed "necessary" to prevent "terrorist” incidents. To make his point Sheehan subpoenaed Paul Wormeli, Vice President of Operational Systems of Arlington, Virginia, to shed some light on the covert activities. Wormeli was a key figure in the escalation of anti-nuclear surveillance. Until 1977, he had been deputy administrator of LEAA; in 1971 he’d helped create the Interstate Organized Crime Index (IOCI), while acting as coordinator of SEARCH, California's criminal justice technologies group. In 1976, Richard Velde, another LEAA official, had explained in a memo to Deputy Attorney General Harold Tyler Jr. that the future use of IOCI would relate to "terrorist control." It subsequently became the FBI's National Crime Information Center.

Wormeli's knowledge wasn’t restricted to LEAA. When its Boston office was dismantled in October 1977, he, Velde and other LEAA guys established a consulting firm called Operational Systems (OSI). According to its spokesman George Campbell, they subsequently went to work for the Public Service Company of New Hampshire, major backer of the Seabrook plant. Campbell admitted that Wormeli’s group gave PSC "public relations input on how to discredit Clamshell," though he denied that the group's work included “intrusive” surveillance techniques.

Wormeli had even approached New Hampshire Governor Meldrin Thompson to obtain security work from the state, a plan that included electronic surveillance. Despite Thompson’s apparent rejection, OSI soon began to work with the New Hampshire State Police. Clamshell leaders were sure that the State cops, probably with OSI assistance, had launched surveillance before the 1978 legal rally. In fact, the authorities admitted photographing people who attended a crucial meeting of the Coordinating Committee. The Alliance also had a list of phones believed to be tapped.

Some Vanguard Press readers may have been shocked by my story, but the facts came as no surprise to most anti-nuclear activists. The previous year Thompson had publicly called Clamshell’s mass occupation at the Seabrook nuclear site a "cover for terrorism." Afterward, some Clams obtained documents from the State Police indicating that the U.S. Labor Party, which promoted nuclear power in its extremist literature, provided the “information,” including the accusation that Clamshell members were "terrorists." Working through its National Caucus of Labor Committee (NCLC) the Labor Party then shifted its focus to Vermont, at the instigation of an appointee to the Vermont State Nuclear Advisory Panel.

New England wasn't the only target of pro-nuclear intelligence groups. During a Los Angeles City Council hearing on a proposed nuclear facility, the L.A. Police Department had assigned two officers to photograph and videotape witnesses critical of the plan. Similar incidents were being reported in Philadelphia, New Jersey, and Georgia. In at least one case, the use of informers and agents-provocateurs had been confirmed. During the trial of activists arrested during the 1977 Abalone Alliance occupation of the Diablo Canyon plant in California, evidence surfaced that two local police officers had infiltrated the group. They were reportedly the only ones to suggest the use of violence.

During testimony before the Vermont Nuclear Advisory Panel, NCLC spokesman Jon Gilbertson, a pro-nuclear expert who once worked for General Electric, denied that his group was anything but a vocal pro-nuclear lobby. Activists charged that NCLC itself was a "terrorist" organization. Yet the strangest aspect of the NCLC's introduction into Vermont energy politics was the origin of its invitation. Nancy Kaufman, an attorney known for her public interest work on utility cases, had helped make the contact to expose the "anti-technology" bias of nuclear opponents.

A former Liberty Union candidate, Kaufman had once labeled herself a socialist. But she and Bernie Sanders had publicly resigned from the party in 1977. Kaufman said she had changed her mind about nukes; jobs outweighed the possible dangers. Bernie didn’t talk about nukes. He just called the party “sad and tragic” and said it wasn’t working anymore.

While a self-proclaimed socialist was entering the pro-nuclear camp, a conservative Republican was moving in the opposite direction. Sen. John Howland of rural Windsor County had been making strong anti-nuclear statements since the spring. "We are just now beginning to realize that we have been conned for a generation," he said, exposing the many hidden costs of nuclear power. The companies had "overbuilt their capacity," and Construction Work in Progress fees, the way utilities obtained investment capital by passing on costs to customers in advance, should be prohibited, he advised. He was eventually joined by the Democratic Party, which called for a moratorium on nuclear construction. The political spectrum was going through a shuffle. Terms like "liberal," "conservative," and "radical" didn’t have as much meaning when applied to issues like nuclear power.

Activists were digging in their heels and making connections, so direct action and other protest tactics wouldn’t end soon. But neither would watching and infiltrating the young social movement, a dynamic that created a rough double-bind for the activists – working to build trust while staying skeptical, if not suspicious, about unfamiliar supporters or anyone advocating tactics other than nonviolence. Fortunately, the intelligence community had neither the time nor the resources to spy on everyone disillusioned with nuclear power and weapons. Then again, with federal and state money, plus incentives from an industry under attack, it was hard to predict just how far the things might go.

Chapter 15 of Prelude to a Revolution

Next: A Vermont Terrorist Scare Begins