The Final Failure of Reaganomics 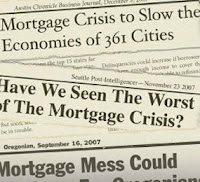 We’ve all seen the headlines: The government takes over troubled mortgage giants Fannie Mae and Freddie Mac, Lehman Brothers files for bankruptcy, Merrill Lynch is acquired by the Bank of America, and the government announces an $85 billion emergency loan to rescue insurance giant American International Group (AIG) as stock prices plummet. And that was just the beginning.

The government is currently debating a $700 billion bailout of distressed banks under a plan that initially proposed to give Treasury Secretary Henry Paulson and the Bush administration unprecedented power. We need to "remove the distressed assets from the financial system," suggests Paulson, who resigned as CEO of Goldman Sachs to become the Treasury secretary in 2006 after amassing a personal net worth of $700 million during his time at the bank.

How did all this happen? The root of the problem can be traced back to the deregulation era that began during the Reagan administration. What George H.W. Bush once called "voodoo economics" fast became the biggest redistribution of wealth since the New Deal. The central article of faith in the "Reagan Revolution" was that money rerouted from the poor to the rich would produce a burst of productivity and economic growth. Give to the corporations and the wealthy, said the "supply side" economists, and they will invest the money in new factories, research and technology, and the country will be restored to greatness.

Did the theory work? Hardly. Rather than putting their money into jobs, research or equipment, the country’s biggest businesses went on the largest merger binge in history, buying up smaller companies in a trend that spelled less competition, less productivity, and more control of the economy in fewer hands. Multi-billion dollar corporate war chests were assembled to finance takeovers of large oil and coal companies, communications giants, and prestigious financial institutions.

After a stock market meltdown in 1987, Wall Street advised the US Treasury not to meddle in financial markets. This paved the way for consolidation around large merchant banks, institutional investors, stock brokerage firms, and large insurance companies. Complex speculative instruments – derivatives, options, futures, and hedge funds – were largely unregulated, becoming vulnerable to manipulation.

Then, in 1999, the Financial Services Modernization Act – also known as the Gramm-Leach-Bliley Act – removed remaining regulatory restraints on Wall Street's powerful banking conglomerates. Repealing the Glass-Steagall Act of 1933, a New Deal reform put in place in response to corruption that had resulted in more than 5,000 bank failures in the years following the 1929 Wall Street crash, commercial banks, brokerage firms, institutional investors and insurance companies were permitted to invest in each others’ enterprises and integrate their financial operations.

In short, the current financial crisis has been building for a long time. But the alarm bells didn’t start ringing until June, 2007, when two hedge funds of the New York investment bank Bear Stearns lurched toward collapse because of their extensive investments in mortgage-backed securities. They were forced to dump assets as the trouble spread to major Wall Street firms such as Merrill Lynch, JPMorgan Chase, Citigroup, and Goldman Sachs, which had loaned the firm money.

Over the summer, German banks with bad investments in the US real-estate market were caught up in the crisis. But the most obvious sign of trouble was the Federal Reserve’s decision on August 9 to pump $24 billion into the US banking system through large purchases of securities, while the European Central Bank made a record cash injection of $130 billion into its markets to shake off credit fears. On the same day, Wall Street suffered its second-worst decline of the year as the Dow Jones dropped by nearly 400 points.

The next day, the Fed pumped another $38 billion in temporary reserves into the financial system, but the government rejected a request for Fannie Mae and Freddie Mac to take on more debt. At the end of the month, President Bush announced a plan to use the Federal Housing Administration, which insures loans for low-income borrowers, to offer government-guaranteed loans to around 80,000 homeowners in default.

On Sept. 18, 2007 the Federal Reserve started cutting interest rates, citing the credit crunch on Wall Street and in the broad economy. The nation's central bank made cuts at seven straight meetings. It also agreed to start loaning money directly to Wall Street firms, rather than only to commercial banks, and to accept troubled mortgage-backed securities as collateral. In October, profits at Citigroup dropped sharply. One large financial institution after another reported heavy losses.

At the start of 2008, the Bank of America acquired Countrywide Financial in a deal that rescued the country's biggest mortgage lender. Another sign of trouble: Bear Stearns CEO James Cayne lost his job. In February, Congress approved a $150-billion spending package to stimulate the sluggish economy. In March, on the verge of collapse and under pressure by the Federal Reserve, Bear Stears was forced to accept a buyout by investment bank JPMorgan Chase at a fire-sale price. The deal was backed by Fed loans – up to $29 billion in financing to cover potential losses. In July, the California mortgage lender IndyMac collapsed and troubles deepened for Fannie Mae and Freddie Mac.

Which brings us to September 6, 2008, when Treasury Secretary Paulson announced the takeover of Fannie and Freddie, putting the government in charge of firms that own or back more than $5 trillion in mortgages. The Treasury Department agreed to provide up to $200 billion in loans to the cash-starved firms, which are crucial sources of mortgage funding for banks and other lenders. It was a bid to reverse a prolonged housing and credit crisis. By the way, this was the same week when the McCain campaign was pushing the “lipstick on a pig” charge and the candidate himself remained certain that the “fundamentals of the economy are strong.”

Both Fannie and Freddie were placed in a government conservatorship, a move that could end up costing billions. The firms own or guarantee about half the home loans in America. The government implicitly had been guaranteeing their creditworthiness, enabling them to borrow at below-market rates. But private shareholders pocketed the profits they made lending cheap money at higher interest rates.

A week later, on Sept, 15, 2008, Lehman Brothers, burdened by $60 billion in soured real-estate holdings, filed for bankruptcy after attempts to rescue the 158-year-old firm failed. Merrill Lynch also agreed to be acquired by the Bank of America, and AIG asked for a bridge loan of billions of dollars from the Federal Reserve. The $50 billion Bank of America deal creates a bank that will rival Citigroup, the biggest US bank in terms of assets. Meanwhile, stocks fell, the Dow Jones sliding 504.48 points – the worst drop since the 9/11 attacks. Stocks also posted big losses in markets across much of the globe. The day has been labeled “Black Monday."

The next day, Sept. 16, 2008, the government agreed to an $85 billion emergency loan to rescue AIG, saying failure of the company could hurt the already delicate financial markets and the economy. That was Tuesday. On Wednesday, the Dow lost about 450 points, giving it a shortfall of more than 800 for the week. Markets around the world were also having a confidence crisis, and Russia shut down its market for a third day following its worst plunge since 1998.

Last Thursday, the Federal Reserve, working with banks in Europe, Canada and Asia, pumped as much as $180 billion into money markets to combat a seizing up of lending. Republicans blasted the Treasury Department and Fed for orchestrating the AIG bailout, and the White House for not informing them of the plan. John McCain said he would fire SEC Chair Chris Cox (which the President can’t actually do), and Barack Obama called it evidence of the failure of deregulation and Bush-McCain policies.

What’s next? Most likely, a $700 billion government bailout, unspecified limitations on executive payouts, a bipartisan board to handle implementation – and, perhaps, changes in regulation of the mortgage market, forcing companies to restructure individual loans rather than foreclose them. It’s not surprising that McCain, who proposed this week that his first debate with Barack Obama be postponed because of congressional negotiations on the proposed bailout, would prefer to grandstand in DC than take questions about his changing positions. A joke in Washington these days is that the crisis seems to be turning former deregulators into socialists – at least as far as business risks are concerns.

Vermont’s junior US Senator, Bernie Sanders, who has never been shy about his socialist leanings, wants to go further. He is proposing a surtax on the very wealthy, stronger oversight of financial institutions, and an end to deregulation policies. He also argues that huge businesses like Bank of America should be broken up so no company in the future could bring the economy down with it. In the meantime, he calls for an immediate economic stimulus package that would put people to work rebuilding infrastructure, and increasing energy efficiency and sustainable energy.

“The people who can best afford to pay and the people who have benefited most from Bush's economic policies are the people who should provide the funds for the bailout,” Sanders says. “It would be immoral to ask the middle class, the people whose standard of living has declined under Bush, to pay for this bail out while the rich, once again, avoid their responsibilities.”

* A five-year, 10 percent surtax on income over $1 million a year for couples and over $500,000 for single taxpayers to raise more than $300 billion in revenue

* Reinstalling the regulatory firewalls that were torn down in 1999, including re-regulating the energy markets and possibly abolishing various financial instruments that have created an enormous shadow banking system at the heart of the financial services meltdown

Finally, and most radically, Sanders calls for ending the danger posed by companies that are "too big to fail," breaking them up if necessary. “We should not be trying to solve the current financial crisis by creating even larger, more powerful institutions,” he argues.

It’s not likely that most of this plan will be embraced by Congress. But the crisis is certainly forcing the country to take a serious look at Reagan’s old claim that “government is the problem.” Even President Bush, in his remarks to the country on Sept. 24, admitted that “democratic capitalism” – which he still considers “the best system ever devised” – needs serious help. With the economy’s “fundamentals” clearly in jeopardy and the disaster wrought by deregulation and corporate excess finally exposed, government intervention has become the only way out.