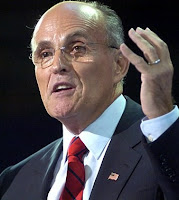 We have now officially entered the political Twilight Zone, a place where truth is what you want it to be and personality replaces policy.

On Day Three of the Republican Convention, Mitt Romney argued that the federal government, media “elites” and Supreme Court are too liberal and the solution is a more conservative administration. No, he wasn’t kidding. The enemies, he said, are forces like “evil extremism,” political correctness and unions, and the US is “the hope of the Earth.”

Mike Huckabee thanked the media elite for unifying the Republican Party, joking that their coverage of VP nominee Sarah Palin was “tackier than a costume change at a Madonna concert.” Watch out, David Letterman! But his main thrust was that Barack Obama wants to impose “European ideas,” while John McCain will take government off our backs – except, of course, if you’re gay, pregnant or deserve to be wiretapped.

But the Newspeak prize goes to Rudy Giuliani. Sure, he went after Hollywood, the UN, “Islamic terrorists,” and the “left wing media.” His purpose, however, was to reduce the election to a choice between two job applicants, one a “true American hero” who has passed every test, the other an Ivy League organizer (at this point the audience began to boo) who became a “celebrity senator” and can’t make a decision. Obama and the Democrats have given up on America, he charged, while McCain and Palin will “shake up Washington.”

By the time Palin took the stage, the crowd was ecstatic, transported to a place beyond hope – a kind of prime time rapture. Half the speech was an extended biography. Palin introduced her family and, due to her own recent experience, promised to be an advocate for special needs children, then moved on to pride and running a small town. She talked about good old boys, power brokers, and special interests, and stressed her knowledge of energy issues. She also talked about challenging the status quo, but didn’t explain what it is.

Her most effective moments came in the second half, however, when she went on the attack, ridiculing Obama with a sneer-tinged smile. It was as vicious as Giuliani and even more personal. In fact, the whole night was personal, a reduction of the election to a choice between biographies, with Palin emerging as Culture Warrior-In-Chief.

So, what about the Issues? Apparently, that would be too 20th Century.