Burlington: From City Hall to the Streets 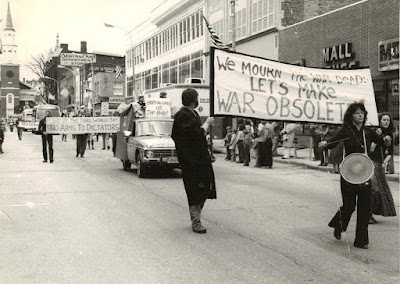 Protesting on Church Street before the MarketplaceWhen Burlington’s Youth Needs report was finished in mid-1976, Vivian Hartigan, who had spearheaded the formation of a local Youth Council, wanted a Board motion to accept it and make the Burlington Youth Council permanent. Embedded in the recommendations was an expanded role for city government in coordinating youth services. There was also a proposal to create Neighborhood Councils as a way to improve communication and accountability. As the city’s Youth Study Coordinator, I’d convinced the panel that this democratic initiative was needed to make the administration keep its promises.

Vivian knew precisely where on the agenda she wanted the proposal, and confided that Mayor Gordie Paquette might have a few drinks under his belt before showing up. As far as he knew, the Board of Aldermen was a lock. But she’d worked the phones and convinced a majority to support her motion. When the issue came up, he didn’t know what hit him. And he couldn’t convincingly sell his disapproval. Plus, Vivian was right, he looked almost drunk.

Gordie glared at me, angry and frustrated, yet not sure whether I’d over-maneuvered him or he was just having a bad night. It turned out to be both, and the first of many. Another came only weeks later, at the first meeting of a Citizen’s Advisory Committee formed to look at the Connector.Mayor Adds 2 Women to Southern Connector Study“Reacting to charges that the Citizen’s Advisory Committee for the proposed “Southern Connector” didn’t include enough ordinary citizens, Mayor Gordon Paquette Wednesday conditionally added two more south end residents to the 10-member panel…” -- Burlington Free Press, July 1, 1976The Highway Department and the Department of Transportation ultimately controlled the money for the road, but they had asked the city to set up a local committee. Mainly, it was supposed to look at different routes. In planning circles the road itself was a foregone conclusion. But technically the planners had to give the appearance of considering “alternatives.”

They also couldn’t ignore complaints by people who lived near or along the route. Outreach had attracted new people to our opposition alliance, young residents like Jean Hanna and Millie Gautherate. They weren’t trying to “overthrow” anything. They just wanted to be heard. At the Advisory Committee’s first session, they made the case that the panel contained too few south end residents – the group most affected by the road – and too many members from interests that would naturally favor it over another way of handling traffic problems.Paquette and William Aswad, a manager at the local General Electric armaments plant in the South End and chair of the City Planning Commission, defended their hand-picked choices – local commissioners and reps from industry and adjoining governments. Anyone else could participate just as effectively, Aswad added, by attending meetings as “observers” and speaking out at hearings. He preferred members with technical expertise, he said, in other words people who would accept the basic assumptions.

“I would have liked a 25-member committee,” claimed Paquette, “but when you start getting committees this large, why, it gets a little unwieldy.” The remark reeked of insincerity. But the Aldermen were impressed with Millie and Jean, and urged Gordie to put them on the committee. He huddled with the key players behind closed doors and emerged to announce his decision. Both women would be allowed to join.

It was modest strategic victory, but provided a foothold, a public platform to discuss alternatives to more roads and unbalanced, unsustainable development. We needed to move fast. Several months of organizing had brought in more supporters, residents worried about similar projects in half a dozen nearby towns. It was time for a multi-issue regional group, the Burlington Area Citizens Alliance. BACA would be the clearing house, a planning committee for “action projects” and a grassroots response to “shoddy regional planning, unnecessary road-building and uncontrolled development.” Within weeks we’d set up the group and organized task forces on the Connector, the proposed Church Street Marketplace and adjacent parking garage, the looming expansion of University Mall in South Burlington, and the potential behemoth in Williston, Pyramid Mall.Burlington didn’t need another “four-lane highway” when local services were being cut and “ecologically sound mass transit” was possible, BACA protested. Suburban development posed a serious threat to a healthy downtown, but turning the city’s center into a better mall wasn’t the answer. BACA would monitor regional development, organize campaigns, and tie the issues together.

In reality it had a core group of less than a dozen highly committed people. But the powers-that-be didn’t know that. Almost overnight groups questioning various development plans seemed to be popping up everywhere. Articles were getting into both Burlington and Rutland newspapers. Whenever city officials held a “dog and pony show,” we brought out an audience and gave a different point of view.Once I left City Hall, the assault became more aggressive. When City Planners brought out their design for a four-block pedestrian mall on Church Street, with commercial kiosks and electrically-heated sidewalks to melt the snow, Steve Cram and I created a multi-media critique, packed the house, and commandeered the agenda. It was a devastating, irreverent guerrilla politics operation. The design was quickly shelved and the architects went back to the drawing board.

Part Eight of Prelude to a Revolution