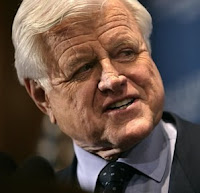 Day One of the Democratic Convention left some hungry for “red meat” attacks on George W. Bush and John McCain. But convention planners and Team Obama decided to go for the heart, driving home their “One Nation” theme with moving speeches by Ted Kennedy and Michelle Obama. “This November, the torch will be passed again to a new generation of Americans,” said Kennedy, echoing a line minted by his brother, President John Kennedy. “The hope rises again. And the dream lives on."

Deflating criticisms that she and her husband are too cool and “elitist” to connect with average people, Michelle Obama delivered a warm, emotional appeal, strong on family, values and love of country. “All of us are driven by a simple belief that the world as it is just won't do – that we have an obligation to fight for the world as it should be,” she said. “That is the thread that connects our hearts.”

Talking heads decried the decision not to go negative right away as a wasted opportunity. “We are a country that is in a borderline recession, we are an 80 percent wrong-track country. Health care, energy — I haven't heard anything about gas prices," argued former Clinton strategist James Carville. “If this party has a message it's done a hell of a job hiding it tonight.”

But weren’t the Democrats just taking a page from the GOP cookbook -- first warm the heart, then go for the jugular? If that’s the recipe, some raw steak is about to be served and the head chef will be Hillary Clinton.

Outside the convention, about 100 protesters were being processed today at Denver's temporary jail in a former warehouse, The Denver Post reports. On Monday night, riot police used pepper spray to force protesters out of the Civic Center, then blocked them from reaching the 16th Street Mall.