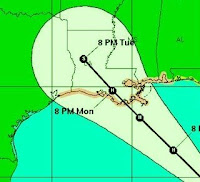 Barack Obama received a predictable post-convention bump in most polls, but the race for president remains fluid. John McCain’s surprise pick of Alaska Governor Sarah Palin is expected to excite the Republican conservative base and possibly help him make inroads with women and independent voters.
Meanwhile, Hurricane Gustav provides the Bush administration and GOP with a chance at redemption, showing that it puts the people of New Orleans and the Gulf Coast above convention hoopla. Most of Monday's planned activities have been suspended. It also gives President Bush and Vice President Cheney a defensible reason not to attend, which comes as a relief to more than a few Republicans.

In the end, nevertheless, the election again could be decided by how the winds shift in Ohio, Florida, plus a few Rocky Mountain states. According to various state polls, Obama is virtually certain to win in 10 states, with a total of 146 electoral votes. These include Democratic strongholds in the Northeast, as well as California and Obama’s home state of Hawaii. McCain appears to have a lock on 101 electoral votes in 13 states, mainly in the South and the Central Plains. Obama is also favored in five more states in the Northeast and Pacific Northwest, which would net him another 44 votes. McCain is favored in nine with 82 votes, including more of the South, Indiana, Montana, and his home state of Arizona.

But even if all this goes as expected, neither candidate would have the 270 Electoral College votes required. Obama looks slightly ahead in Pennsylvania, Michigan, Wisconsin, Iowa, and Minnesota, while McCain currently has an edge in Virginia, Arkansas, and Missouri. Assuming there are no upsets that still gives Obama only 255 votes from 19 states and McCain 213 from 25. This would leave five toss up states – Ohio, Florida, Colorado, New Mexico, Nevada and New Hampshire – with a total of 70 votes.

McCain’s campaign hopes hold on to the states that Bush won in 2004 and pick off Michigan, Pennsylvania or another Democratic-leaning state where he’s in striking distance. But that’s not certain and he meanwhile faces a challenge in Virginia. In Northern Virginia, Obama could benefit from increased Black voter turnout. To compensate, McCain is expected to target military families.

Obama is aggressively going after Colorado, where he accepted the Democratic nomination, and Iowa, where his positions and campaign organization could give him an edge. In addition, one or more Bush states could flip, including Michigan and Pennsylvania. McCain could take New Hampshire, but only four electoral votes are at stake and New England has clearly shifted Democratic in recent years.

Even if Obama doesn’t win, Democratic congressional majorities are expected to grow. The Democrats have advantages in fundraising, candidates, and polls that ask people which party they want to run Congress. In the Senate, the Democrats currently have a 51-49 majority and five retiring senators are Republican, three in states that Democrats look likely to win. No Democratic senators are retiring. The Democrats’ Senatorial Campaign Committee has a 2-to-1 cash advantage, which should help to extent their majority no matter who wins the presidency.

The real issue is not how well Obama or McCain might do in the closely divided battleground states, but that we shouldn't have battleground states and spectator states in the first place. Every vote in every state should be politically relevant in a presidential election. And, every vote should be equal. We should have a national popular vote for President in which the White House goes to the candidate who gets the most popular votes in all 50 states.

Because of state-by-state enacted rules for winner-take-all awarding of their electoral votes, recent candidates with limited funds have concentrated their attention on a handful of closely divided "battleground" states. In 2004 two-thirds of the visits and money were focused in just six states; 88% on 9 states, and 99% of the money went to just 16 states. Two-thirds of the states and people have been merely spectators to the presidential election.

Another shortcoming of the current system is that a candidate can win the Presidency without winning the most popular votes nationwide.

The National Popular Vote bill has passed 21 state legislative chambers, including one house in Arkansas, Colorado, Maine, North Carolina, and Washington, and both houses in California, Hawaii, Illinois, New Jersey, Maryland, Massachusetts, Rhode Island, and Vermont. The bill has been enacted by Hawaii, Illinois, New Jersey, and Maryland. These four states possess 50 electoral votes — 19% of the 270 necessary to bring the law into effect.