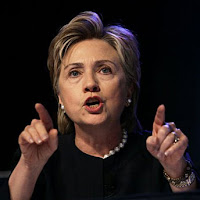 Day Two of the Democratic Convention was supposed to focus on “Renewing America’s Promise.” But the real drama revolved around Hillary Clinton, specifically how she’d handle two big tasks – bringing her disappointed supporters around to Barack Obama and taking the fight to John McCain. She managed both with power and grace, a performance so convincing that if Obama does lose in November she’ll be impossible to blame.

It was also a day to test catch phrases and attack jokes. Describing McCain’s support for the Bush agenda, Sen. Bob Casey offered a clever entry: “That’s not a maverick, that’s a sidekick.” According to pundit Jeffrey Toobin, this is what the Democrats need, “something simple and easy to remember.”

If that’s the challenge, Clinton came ready to play. “No way, no how, no McCain,” she began. And later, “we don’t need four more years of the last eight years.” But her rim shot was a play on St Paul and Minneapolis, location of the upcoming GOP convention. “It makes sense that George Bush and John McCain will be together next week in the Twin Cities,” she said, "because these days they're awfully hard to tell apart.'' Ba-dum!

Virginia Governor Mark Warner’s keynote talk was a letdown, especially considering that four years ago his spot was filled by Obama, who galvanized the hall and launched himself nationally. Instead, Warner served up marginal remarks aimed at independent voters. Describing the race as a choice between the past and the future, he barely mentioned the GOP candidate.


But Hillary was ready to do the heavy lifting. Watched from on high by her husband, she urged unity “as a single party with a single purpose” and made the case against McCain – more war, lost jobs, privatized social security, opposition to equal pay for women, and the threat of a “Supreme Court in a right wing headlock,” to name but a few. She also challenged her supporters. “Ask yourselves,” she said, “Were you in this campaign just for me?” Leaving no doubt about how she hopes they’ll answer the question, Clinton declared, “Barack Obama is my candidate” and she can’t wait to watch him “sign into law a health care plan that covers every American.” All in all, a hard act to follow.