Upset about how the media has handled recent protests around the country? First most of the press ignores Occupy Wall Street (and other places), then they go wall-to-wall for a while. And yet they continually question what it’s all about – as if economic inequality is an obscure notion -- and eventually manage to divert the discussion.
This is not a new approach to coverage of social movements. Let's take a look back just ten years: 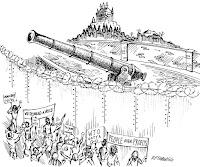 In April 2001, less than five months before 9/11, most media outlets provided a useful lesson in spin control during coverage of an economic summit in Quebec City designed to win support for a so-called Free Trade Area of the Americas, known as the FTAA. After largely ignoring the story in the days immediately preceding the meeting, TV networks went all in as soon as the first protesters began dismantling the security perimeter separating them from the gathered heads of state.
The images were simply irresistible.
Less than 24 hours later, however, despite an escalation of police violence in Quebec, large protests throughout the Americas, and serious disagreements among the leaders attending the summit, the coverage shifted again. Footage of the protest was abruptly dropped from the coverage, and a new story emerged.
The Associated Press led the charge, announcing in a headline that the proposed trade deal had been "ratified." Despite reality – notably the fact that ratification was in serious doubt and years away – the intention was to leave the impression that a deal had been struck and the protest had become irrelevant.
That was Saturday night. By Monday, the official line was in place: Despite protests, announced the wire service, an "accord" had been signed. Newspapers across the country dutifully disseminated the misinformation. In fact, all that they signed was a "communique" – about as binding as a joint press release – that expressed a willingness to keep at it.
Behind the scenes, all was not well. Even before the meeting, Brazilian President Fernando Henrique Cardoso had expressed concerns about the risks posed to vulnerable Latin American economies by the trade agreement.
Venezuela dissented from several points in the communique, saying it wouldn't be able to meet the 2005 deadline for ratification. In response, Canadian Prime Minister Jean Chretien provided his personal assurance that, despite such equivocation and the leadership of Hugo Chavez, it could stay in the global club anyway -- as long as a referendum could be stage-managed at some point.
Caught between US pressure and internal opposition to corporate trade deals fueled by the Zapatista rebellion, Mexican President Vicente Fox struggled to find some middle ground. While backing the FTAA, he called for initiatives to promote democracy and reduce poverty, decrying the "whims of market forces." That was carefully excised from US reports.
Doubts were also growing that newly-installed President George W. Bush would succeed in winning "fast track" – recently renamed "trade promotion authority." According to US Sen. Max Baucus, the top Democrat on the Finance Committee at the time, Bush didn’t have the votes “because they've not yet worked out ways to adequately and meaningfully deal with labor and environmental issues."
Without "fast track" legislative authority in the president's hands, the argument was that many Latin American countries would not take US promises seriously, and the FTAA was unlikely to be implemented. Insiders said Bush had less than a year to win that fight. He never did. The FTAA and other trade and investment deals --- not to mention a Bush pledge to "compete in the long term with the Far East and Europe" – faltered in the years that followed.
The corporate press never admitted it, but the Quebec talks failed. No agreement was reached on an FTAA text, which helped explain why a draft document wasn't released. Instead, the "communique" attempted to spin the setback by focusing on an empty promise that future FTAA member countries would have to observe "democratic norms."
Actually, this allowed the US to rationalize the exclusion of Cuba, the hemisphere's harshest critic of corporate-driven trade rules, and intensify pressure on Haiti, whose President Jean-Bertrand Aristide was again out of favor in Washington.
A year later, there was an unsuccessful coup attempt in Venezuela. Aristide was forced into exile in early 2004. Both exercises in regime change showed faint US fingerprints.
Casualties of a covert war for globalization? Perhaps. In any case, both stories hit a virtual press blackout, emboldening at least one other coup since then. Think Honduras.
A Brief Recap…
There has been no admission of US involvement in the removal of President Manuel Zelaya, the first successful coup in Central America in about 25 years. But US policy clearly shifted after he decided to improve relations with Venezuela. Even after the UN General Assembly demanded Zelaya’s reinstatement, Obama declined to call it a coup.

The ousted, democratically-elected president agreed to exile in the Dominican Republic. His replacement, Porfirio Lobo Sosa, was a conservative landowner with a business degree from the University of Miami. Brazil, Venezuela and Argentina called his election illegitimate. Secretary of State Clinton backed the new leader.
Two years later, Zelaya returned. The post-coup government has become a pariah in the region. A State Department cable released by Wikileaks reveals that US leaders knew the coup was illegal. The cable was titled, "Open and Shut: The Case of the Honduran Coup."
Nevertheless, Amy Goodman was the only US journalist on Zelaya's flight home. He was greeted by tens of thousands of people cheering and waving the black-and-red flag of the movement born after the coup, the National Front of Popular Resistance. In Honduras it’s known simply as "the resistance."
Since the coup, violence has been widespread. Anyone daring to speak out risks intimidation, arrest and possibly murder. At least a dozen journalists have been killed, according to the Committee to Protect Journalists. Scores of campesinos have also been killed. The UN is concerned that organized crime groups are targeting lawyers.
Back to Quebec….
Playing the "democracy" card during the 2001 Quebec summit underscored the hypocrisy that often characterizes talk about "free" trade. If world leaders were actually concerned about democracy, they might have spoken up about the US-financed war raging in Colombia at the time, or perhaps refused to attend the next World Trade Organization meeting, slated to be held in Qatar, an Arabian Peninsula monarchy where demonstrations are against the law. They didn’t.
Despite the official spin and a media preoccupation with protest tactics, the Quebec Summit was a golden opportunity for the movement against corporate globalization to build global solidarity. In addition to the 70,000 people who took to the streets of Quebec City, thousands more converged across the US, at the Mexican border, and in South America. An emerging independent media network provided effective on-the-spot reporting, countering the corporate line, highlighting state repression, and uniting the opposition.
Back peddling during the Summit and afterward was a direct response to the protests. But that’s not how it was reported – when it was mentioned at all.
Five months later, when planes crashed into the World Trade Center and Pentagon, a people’s movement -- growing for almost a decade and poised for "revolutionary" impact -- was sidetracked by tragedy and war.
In the mainstream media, it was all too quickly forgotten.
Posted by Greg Guma at 12/16/2011 10:37:00 PM