“The vultures get their hands on money that they claim is owed by the poorest nations, usually during a civil war. Then they find loopholes and seize all the wealth.” – Greg Palast
By Greg Guma   In his new book, Vultures' Picnic, Greg Palast pulls together documents and stories from more than three decades of detective work, unraveling the schemes of the Energy-Finance Combine and exposing several real life vulture capitalists. On Dec. 12, he will visit Burlington and share some of what he has found out at Main Street Landing during a 7 p.m. talk sponsored by Toward Freedom.
We talked on December 4, covering BP's crimes in the Gulf and Caspian Sea, Entergy's exploitation of hurricane Katrina, what it's like to interview a corporate predator, making the transition from investigator to journalist, and why Uber-Vulture Paul Singer wants him off British TV. Here are some excerpts. Also check out my feature about Palast and the vultures for VTDigger.org -- In fedora and trench coat, Palast exposes "vultures" who profit from crisis.  Below this interview you'll find recent radio coverage by Free Speech Radio News.

* * *
Guma: By the time I got to Page 348 in Vultures' Picnic, when you’re talking about Joe Stiglitz and the IMF riots, I had to wonder whether the current uprisings are part of the plan. You know, decriminalizing banking, privatization and the assumption that austerity will lead to unrest and a crackdown…
Palast: No doubt about it. Same smell, same scene. But Joe Stiglitz (economist and former member of the Clinton cabinet) doesn’t give me the information. It’s very important to him that he doesn’t violate his agreements.
Guma: Why did you use a reportage verite style for this book?
Palast: Because this is how I do it. Since The Best Democracy Money Can Buy, people are used to it. And people know about me from reporting on the presidential voting scandal. There I gave you the information that I cover. I thought it was important to say how I’m getting it - and sometimes failing to get it. I didn’t want to keep doing the same thing. Another reason is that I wanted to make the point that I’m an ordinary guy in extraordinary circumstances. People should know my story.
Guma: If the British government is an arm of BP’s imperial power, what is BP an arm of?
Palast: Actually, BP is an arm of Morgan Stanley. It used to be that BP was an extension of military intelligence, now the roles are reversed.
Guma: There’s so much to say about BP. Starting with homicide…
Palast: Exactly. The information we got from an eyewitness right after the blow out was that this was not the first time. And it was the same reason, cheap crap cement. And they covered it up by beatings and bribery and blow jobs. Vulture Picnic is saying that they covered this up – and by doing that 11 guys died. I’m saying, as a former racketeering and fraud investigator, that it was a crime.
There’s a lock up between Big Oil, Big Finance and Big Government. All the oil companies knew about the problem prior to the blow out, and the Department of State may have hidden it from Congress.
We tracked them to Azerbaijan and got arrested in the desert, but Badpenny gave me a camera pen so I got the documents out. When I work for BBC and The Guardian, I’m under British law. I have to give this evidence to BP and ask them whether it’s right. And they have never denied it. Did you have another blow out? No denial, just blah blah blah.
There were three crimes. Crime number one: PB destroyed the Caspian Sea and the Gulf. The Gulf of Mexico is a crime scene. Crime number two: The government knew and covered it up. And crime number three: The US press is ignoring it, except maybe a public whipping, maybe.
The New York Times is a local paper that does gossip. And NPR has become the National Petroluem Network. In Britain I’m mainstream, I work for the BBC and The Guardian. So, they can’t tell us that didn’t know this.
Guma: You say that one of the lessons for BP was, “Don’t prevent, don’t pay.” Which brings us to the vultures. Who are they?
Palast: You can get a lot of the details in 1st chapter, which you can download free.

First, there really is a Goldfinger, and compared to him the movie villain was a girl scout. The vultures get their hands on money that they claim is owed by the poorest nations, usually during a civil war. Then they find loopholes and seize all the wealth.
The number one US vulture is Paul Singer, an advisor to Romney. His office recently called the BBC in London to say they have a file on Palast. They really want to smear me and implied that a lawsuit was coming. Paul Singer is the number one donor to the Republican Party. So, they are not minor players. He makes his money by literally killing babies, according to the former Deputy Secretary of the UN. And what Singer wants is Palast off the air. He sent a complaint to The Guardian.
His buddy – they literally have a club – is Goldfinger, who bribed the President of Zambia with $3 million. In return he let Goldfinger collect a phony debt and take $45 million off the Zambian treasury – the money we gave them to fight AIDs. This is also a crime.
We tracked the trail of the president. His bank was in Geneva and Badpenny followed the trail, pulling off the role of a TV star. She says, “We’re from a reality show, Shopping with the Rich and Famous.”
Since we put this on the air the laws have changed in several nations. Now they bar these vulture speculators. But this was a case of bribery. The door is closed, but not in America.
Guma: When you get into the room with someone like that, or the generalissimo of globalization, is anyone really there?
Palast: I find that the government guys are just careerists. But the actual vultures are brilliant and frightening, and most are fairly charming. And they know their shit. The oil guys are actually quite brilliant. You really have to know your stuff, and not get charmed. Think back: How many news guys licked the loafers of Ken Lay?
Because they know me – and I have a degree in international finance – they have a tough time saying I don’t understand. Actually, they run from me in some of these stake outs.

^^
^^
Guma: Let’s talk about nuclear power. Vermont Yankee may close next March…
Palast: The operative word is “may.”
Guma: …and Entergy is suing. What can you add to the discussion for Vermonters?
Palast: There’s no effective earthquake proofing. Remember we’re talking about a seismic event, for instance the kids from Al Qaeda. If things screw up you have only one thing between you and disaster—those diesel generators. But we know that they might as well as put Hanukah bushes around the plant.
There is no way those generators can fire up – actually maybe a 50 percent chance. In nuclear power, the problem is always something cheap. There are three things involved in every plant: cement, steel and fraud. The companies just change their names.
Entergy had enough brains to get Hillary [Clinton], a smart move. When I investigated them for the City of New Orleans I went through their books and found a corrupt cesspool. The NRC calls the standard “management integrity.” They don’t have it.
They were the power company for New Orleans. Parts of the city were dark for more than a year after the hurricane. There are places that still don’t have electricity. They said that unless rates went up the lights wouldn’t be turned on. The city went down and they took the power for the plant and sold it for profit. As a result Entergy made a fortune off Katrina. They could sell power at a premium elsewhere. They took the gain and pocketed it.
When they run scams like that, don’t trust them. If they’re lying about the money they’re lying about everything. 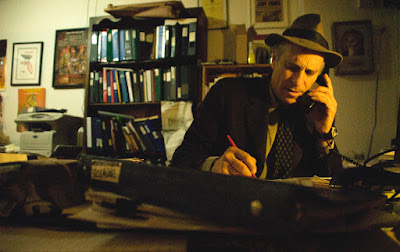 Guma: After years investigating corporate crimes was making the change to investigative journalist empowering?
Palast: It was necessary. What was the point of doing this, I thought, when I had to dump stuff in a file and seal it. I was going insane, not being able to make this public. Going public is vital to me. In London I am on the front page, and all over Europe and Africa. Here I can barely get on the radio. But at least I can shout from across the water, as opposed to not being able to say anything because it’s under seal.
Guma: So, the vultures eat the carcasses – whole countries sometimes – but the real killing is made by Switzerland, Norway, US and Britain – the so-called donor nations. And the ultimate winners are the energy-finance combine. Is this an institutional or structural problem, or mainly the actions of the vultures and others in the 1%?
Palast: I hate the bad apply model. That’s why I hated the Enron story. I wrote about it as an example. The whole tree is rotten to the roots; that is the key. And the so-called investigative journalists are the biggest part of the cover up because they find a bad guy for you to pick on. This justifies the status quo.
Guma: Despite all that, aren’t you more optimistic with the rise of Lula, Chavez, and Morales in Latin America, and the overall mood at the moment?
Palast: Sure. The problem is religious, and this is a religious book. These are matter of faith and personal courage. That’s the story I’m telling. It’s about whether we have the courage not to be slaves, toadies and greedsters.
Greg Palast: Vultures in the Congo
Posted by Greg Guma at 12/06/2011 09:17:00 PM