Despite privacy issues and security concerns, smart meter conversion is proceeding rapidly in Vermont, thanks to federal funding, Bernie Sanders, and a partnership with Lockheed’s Sandia Labs. By Greg Guma (originally posted September, 2011) 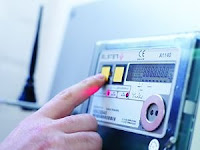 Vermont is frequently touted as a leader in energy innovation, with efforts underway to dramatically improve efficiency, develop renewable sources and convert to smart grid technology. This reputation recently attracted $69.8 million in US Department of Energy funding to promote rapid statewide conversion to smart grid technology, not to mention the interest of Sandia National Laboratories, which launched the Vermont-Sandia Partnership with the University of Vermont, Vermont Law School, and Norwich University.

The relationship with Sandia took shape in 2008 when US Sen. Bernie Sanders began to push for a Vermont satellite lab. By early 2011, it had evolved into a full-fledged public-private partnership that includes educational institutions and leading businesses.  A $1 million grant from Department of Energy funded the initial development, including student internships and visits to Sandia’s home base by UVM professors.

In Burlington, the state’s largest city, smart grid conversion got underway the previous spring, but received a major boost on Sept. 26 with the City Council’s approval of $6.2 million for equipment, software and purchases from various contractors. Burlington’s municipally-owned electric department (BED) is working with other Vermont utilities as well as DOE.
The federal funding represents an estimated 50 percent reimbursement for the project, with the state and local communities kicking in the remainder. The total cost for Burlington should be around $14.3 million. In June 2011, local voters approved $7.15 million in bonds to pay the city’s share. According to Ken Nolan, Manager of Power Resources for BED, the bonds were scheduled to be issued in early October.

Nolan briefed the City Council prior to its unanimous approval of 14 contracts. The largest amounts were $3.49 million to Itron, Inc., mostly for the meters themselves; $1.05 million to Siemens Energy and eMeter for the data management system; and $877,215 to Telvent for upgrading the Utilities Group for Supervisor Control and Data Acquisition (SCADA) system, known as the “brains” of energy distribution.

The new meters will relay electrical use over a two-way system, allowing utilities and customers to monitor energy use without employees who physically read meters. On Sept. 15, the Public Service Board led an interactive hearing in Brattleboro to collect public input on the privacy and security issues raised by installing them in private homes. The Board also assessed a controversial “opt out” policy under which homeowners who don’t want the meters would be forced to pay a monthly fee, estimated at $10, if they stick with traditional electric meters.

**
By the end of 2011 Burlington had so far spent $4.4 million on conversion, mostly on substation improvements, a fiber optics loop and construction of a backup operations center. In order to leap forward from there, BED asked the Council to approve most of the major expenditures as a package. However, some vendors hadn’t been selected yet, and other contracts were expected to follow. The City Council also faced decisions “around future efforts surrounding customer education and phone replacement,” according to BED’s report.

Asked to provide a timeline and describe the benefits, Nolan said that installation of smart meters in Burlington would begin in January. By April 2012, many local homeowners would “start seeing how they use energy.” New rates would be developed, based on use analysis, and presented to the PSB in 2013. Those able to shift their energy use were expected to save money. Beyond that, he also mentioned new appliances that can be turned on and off by the meter. In the long term, utilities will be able to use the data collected by the meters to “work with customers on usage,” he said.

Central Vermont Public Service and Green Mountain Power, the state’s two major private utilities, were also gearing up to install the new meters. In Rutland installation was also slated to be underway in January. But some consumers were already concerned about who would have access to the information collected and whether it would be secure.

Vermont ACLU director Allen Gilbert publicly warned that in the past GPS information, cell phone use and other electronic data have been obtained without proper warrants. He argued that any personal information collected by a smart meter should be protected, and customers should be informed if anyone gains access.

One of the weak links is SCADA, the "brain" that collects data and sends it to a central computer. In 1999, when a pipeline burst in Bellingham, Washington, a SCADA failure was implicated. SCADA network and control systems also run dams, power plants, and gas and oil refineries.

A 2010 study funded by security vendor McAfee Inc and released by the Center for Strategic and International Studies, concluded that SCADA systems are being attacked by a variety of methods, individuals and gangs. Two-thirds of those surveyed said their SCADA systems were connected to an IP network or the Internet. About half of those said the connection created SCADA security issues that aren't being addressed.

“BED presently utilizes a SCADA system created by Telvent Utilities Group,” states the memo on Burlington’s smart grid contracts, “but this software is several versions old and is designed to communicate utilizing radio technology.” The local utility plans to upgrade to the latest software, convert most of its communication systems to fiber-optics, and install a “video wall” distribution map. Remote terminals will allow the software to “speak with equipment on the distribution system.”

Security is a major focus for Sandia National Laboratories, a Lockheed Martin subsidiary headquartered in New Mexico with roots in the Manhattan Project during World War II. In fact, Sandia has long called itself a "national security lab." But its 21st century mission also includes "security of the smart grid."

In early August 2011, after more than six months of study and local debate, Burlington’s City Council adopted a resolution on community standards for partnerships with businesses to address energy and climate change. This came largely in response to public criticism of a partnership agreement signed with Lockheed Martin by Progressive Party Mayor Bob Kiss. More than 50 local residents testified on the issue during public meetings, all but a few opposing the deal with the arms maker.

Kiss called the standards that emerged “bad public policy,” questioned whether most city residents actually support what he called a “restrictive and regressive approach,” and vetoed the resolution. In statement issued on Sept. 6, 2011, he said the policy adopted by the Council might have contributed to a decision by Lockheed to pull out of the Burlington agreement. It was “a sorry achievement” that ran contrary to “building respectful municipal partnerships,” he charged. The City Council narrowly upheld his veto.

Local resistance hasn’t affected Sandia’s “partnership” with the state. According to Les Shephard, vice president for energy, resources and nonproliferation, Vermont will be a “test bed” for “how to bring these technologies to bear.” It is appealing to Sandia not only because of its leadership on energy issues, he told the Burlington Free Press in 2010, but also because of its climate. "We could develop, deploy and assess various types of technology in cold weather," Shephard said. "Our test facilities here are in the bright skies of New Mexico, where we have over 300 days of sunshine."

.
The Energy Department doesn't have a national lab in New England. But Sanders began lobbying for a Vermont-based satellite lab during a visit to Sandia in 2008. "At the end of the day,” Shephard recalled later, “he turned to the laboratory director and said, 'I'd really like to have a set of capabilities like Sandia in New England -- and very much so in Vermont.' And that's how it all evolved."

In July 2011, the Vermont-Sandia project offered a series of short courses on smart grid modernization for Vermont utility staff, energy-tech company management, and others stakeholders to examine and promote conversion.  That fall seminars mainly focusing on the same issues were held in cooperation with the Gund Institute.

For example, Dr. Rush Robinett III discussed “Integrating Renewables into the Electric Grid” on the UVM campus as part of the series. Sandia’s senior manager in the Grid Modernization and Military Energy Systems Group, Robinett began working with Sandia in the 1980s as part of the staff developing the Star Wars (Ballistic Missile Defense) program. Since then he has concentrated on robotics and power infrastructure.

According to its website, the Sandia-Vermont Partnership was created to “enhance multidisciplinary education and workforce development” related to smart-grid, promote research collaboration, and “form liaisons with private and public stakeholders.” Sandia projects that more than 80 percent of Vermont consumers will be using smart meters by 2015.

Sen. Sanders, who has criticized Lockheed Martin in the past as a profiteer and corporate criminal, nevertheless envisions Vermont transformed “into a real-world lab for the entire nation” through its partnership with Sandia. “We're at the beginning of something that could be of extraordinary significance to Vermont and the rest of the country,” he insists. "This state is leading the country in energy efficiency. Period. We are No. 1.”