In a new video release from the long-running morning variety show in the People’s Republic of Burlington, legendary host f.p. Cassini interviews former nuclear engineer Arnie Gundersen. It’s a candid, wide-ranging and intimate discussion, tracing his transformation and analyzing the current confrontation between Entergy and Vermont over Vermont Yankee. 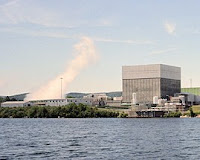 Showcased in the studio atmosphere at WOMM-FM/LP (The Radiator, streaming online and 105.9 in Burlington) Gundersen talks frankly about current events, but also reflects on his own path – from senior vice president of Nuclear Energy Services, involved with 70 nuclear power plants, to blacklisted whistleblower, sued for defamation and losing his home in the process. Although he predicts that Vermont Yankee may remain open for years past its current March 2012 deadline, Gundersen is hopeful, seeing breakthroughs and possibilities ahead that could soon make nuclear energy uncompetitive.

Vermont Yankee’s owners aren’t saying whether they will invest $60 million to purchase refueling supplies for a scheduled outage this fall. On July 18, Judge J. Garvan Murtha ruled that Entergy had failed to show irreparable harm and denied its owners a preliminary injunction that would keep the plant running until its lawsuit against the state has worked through the courts.

During a US District Court hearing last month in Brattleboro, John Herron, Chief Nuclear Officer for Entergy, announced that if the plant isn't able to refuel, it is "highly likely" that Vermont Yankee will have to be shut down. The next refueling outage is slated for Oct. 8. Herron said that a choice needs to be made immediately.

The decision to refuel could be delayed up to a month without much harm, he added, but longer would require the fuel core design to be re-analyzed. Fuel is specially fabricated for each reactor and wouldn't be readily transferable to any of Entergy's other nuclear plants around the country. This makes the investment risky.

"I have to make a $60 million investment here that I may, in fact, not even really be able to recover," Herron told the judge. "We may have to actually start looking at a permanent shutdown." Entergy lawyer Kathleen Sullivan has echoed those concerns, calling the fuel order "a make-or-break decision on the life of the plant."

If Entergy decides to go ahead with the purchase, it supports the view of critics who say the company is making misleading statements. Many of Entergy's troubles in Vermont stem from 2010 revelations that radioactive tritium was leaking from underground pipes at the Vernon reactor. Plant officials had previously told lawmakers and Vermont regulators the leaks didn’t exist.

Raymond Shadis, technical advisor for the New England Coalition, a watchdog group, suggests that Entergy officials may not even know if they're going to refuel yet. He argued that Entergy could regain its investment before March 21, 2012, the expiration date of the plant's initial 40-year operating license.

Earlier this year Vermont Yankee won federal approval from the Nuclear Regulatory Commission for a 20-year license extension. Emboldened, it has sued in US District Court to block the state's efforts to shut the plant down.

NEC President Ned Childs said refueling could be Entergy's last financial decision regarding the nuclear plant. "Vermont Yankee hasn't met its allocated maintenance costs, meaning it hasn't turned a profit for the last three years," Childs said. "One more unanticipated large expense, such as a new steam dryer or modifications resulting from a Fukushima accident inquest, is likely to sink the ship. I can see no rational business reason for Entergy to persist."

Childs suggests that Entergy officials take the advice from Kenny Rogers' song The Gambler – cut their losses and walk away. Shadis agrees, stating that closing the plant is no longer a question of if but when and how.