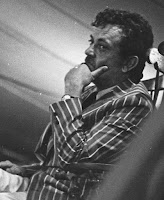 Despite the state of the world as the 1960s ended, life in Vermont felt manageable and safe for a while. Juggling two lives – hippie by night, journalist and shutterbug by day – I became relatively comfortable with the contradiction. My wife Kat, a local girl I’d met at Syracuse, landed a job at a boutique launched by a designer who resembled Rasputin and briefly put us under his spell. He hosted elaborate happenings at the Victorian mansion he owned nearby, and we became close collaborators on various counter-cultural projects for the next few years.

In what seemed at the time like a brilliant career move, I changed jobs in 1970 – from local newspaper reporter to Director of Publications and Public Information at one of the most exclusive schools in the country. But Bennington College turned out to be a cauldron for my discontent. Barely more than a student myself, I often felt like a sellout. Creature comforts – a new home, endless parties, a private darkroom – couldn’t compensate for the fact that I was confused and intermittently depressed. Retreating from reality, I spent hours in my darkroom and at my drafting table, working with prints and abstract art that only briefly numbed the pain.

To make matters worse, the college wasn’t the radical enclave it appeared to be. It was an insular place full of hidden hierarchies and pretentious poseurs. My job was basically to perpetuate the illusion. At the commencement ceremonies in June, I shared my doubts with Kurt Vonnegut, invited to address the graduates. Someday I hoped to become a “serious” writer, I told him, and was worried about becoming a worthless PR flak. Don’t sweat it, he replied. He’d done the same thing at General Electric. Even press releases could help to learn the craft.

Temporarily reassured, I set worries aside for the summer. But when the students returned, so did my discomfort. The issue that set it off was a proposal for educational reform drafted by several faculty members. They called it The Plan. Arguing that Bennington’s growth should end, it called for closing the Development Office, electing the President, and creating an organic community in which teacher-students and student-teachers worked together as equals. Of course, the proposed Performing Arts Center on the drawing board for several years would have to be scrapped, and there would be no need for a job like mine.

It sounded extreme, but fit in well with the overall mood on campuses across the country. Everywhere you went there were discussions about pollution, population, women’s liberation, natural foods, and resisting the draft. You couldn’t visit Bennington without hearing or seeing phrases like “Man is an endangered species” and “We are all passengers on Spaceship Earth.” At commencement, Vonnegut put it this way: “The majority of people who rule us, who have our money and power, are lawyers or military men. The lawyers want to talk our problems out of existence. The military men want us to find the bad guys and put bullets through their brains. These are not always the best solutions – particularly in the fields of sewage disposal and birth control.”

The times were urgent, so I decided that the upcoming issue of Quadrille, the school’s quarterly journal, should examine what people with power and money were doing to the environment and our lives. It would also consider some of the alternatives, many of which were being discussed on campus. Thus, when asked to include The Plan, I eagerly agreed, pending approval by my supervisors, the Development Director and Bennington President Edward J. Bloustein. Both seemed un-phased and said OK. Bloustein, a legal scholar who bragged that he couldn’t be provoked, even agreed to write a response. But as the publication date approached, he changed his mind.

“What did he say to you?” One of the authors asked when I gave him the bad news. “I didn’t speak to him directly,” I explained, “but my boss said he didn’t have time to write a response and that we’ll probably have a full airing in next Spring. He also told me it would do no good to approach the President directly. Like beating a dead horse, he said.”

“A fine thought,” the teacher replied. “Well, it’s censorship as far as I’m concerned. Ed’s been pulling this kind of thing for too long. I think this deserves a galley.”

Two decades before the Internet, galleys were the only means of rapid campus communication, basically mimeographed viewpoints placed in student and faculty mailboxes. This particular galley turned out to be more of a demand. Charging the president with censorship, it called on him to reverse the decision and explain himself. At the bottom, I added a brief note urging further dialogue without taking sides.

Bloustein shot back with a galley of his own. The magazine wasn’t “a campus journal of any and all opinion,” he proclaimed, and The Plan wouldn’t be published because it was “too partisan and too polemical.” Evidently, he could be provoked.

It didn’t end there. Over the next weeks, other galleys revealed that bonds were being floated to finance new construction and tuition fees would increase next year. Apparently, the school would be paying for its expansion for decades. When one of The Plan’s author’s received word that his teaching contract wouldn’t be renewed, students surrounded the president’s office. Bloustein left through a window, then issued another galley.

Ultimately, I got a pink slip. By then I didn’t care. While shooting photos at a benefit performance by Carol Channing in Boston, I’d reached the conclusion that I’d become a hack. Returning to Vermont, I vaguely sensed what I had to do. On the surface it looked as if I had everything – a good job, lovely wife, nice home, and promising future. Who in his right mind would throw all that away? But I wasn't in my right mind, and something had to give.

A few days later I went to work, strolled into a field, and stayed there for hours, broken and lost. When I walked back toward the campus I knew that I couldn't return to work as usual. The next days passed in a haze. I wandered aimlessly, crashing at night wherever someone would take me in. For several weeks I hovered on the verge of a breakdown. At one point I sat for hours, completely still, in the middle of the student Commons building, determined not to move until someone noticed me. It was as if I had completely run out of steam.

In the Commons a few days later, I noticed a woman laying out strange-looking cards. When I asked what they were, she said the word Tarot. Judith was an ethereal enigma who could see that I needed help and was compassionate enough to offer a place to stay. She provided tea, a copy of Steppenwolf, and Tarot readings whenever I wanted. The cards were kept in a silk scarf, as if they were holy relics to be treated with reverent care.

For several years, I'd been essentially without a spiritual compass. Catholicism had never rung true, and once I stopped going through the motions I saw no reason to replace my lost faith with another. If I had a philosophy of life, it was some sort of middle-class hedonism, spiced with grass and black light. As much as I was able, I let that – plus sex and rock music – be my religion. But through Judith I discovered a different way to view reality. Her gentle spiritualism touched my heart and provided a way to see life through the eyes of synchronicity, metaphor, and intuition. Those days in the woods rescued my soul.

Next: Reality Check in the Nixon Era