Chicago, COINTELPRO & the War at Home 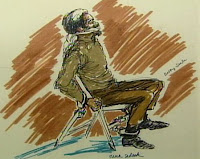 The Chicago Eight defendants, activist leaders of several groups, couldn’t agree on much -- even lunch. But they did share the opinion that their country was on the wrong path. Responsive government, not rule by unaccountable elites – that was what they, and many of us who joined them in rebellion, desperately wanted. “The demonstrations in Chicago represented a demand to be heard in decisions affecting millions of lives,” I explained in a 1969 editorial column for the Bennington Banner.

Obviously, such temerity had to be punished. It didn’t take long. On October 28, newspapers across the country announced an outrage that seemed unimaginable in late 20th century America. Judge Julius Hoffman had ordered one of the defendants, Black Panther leader Bobbie Seale, to be chained, bound and gagged in open court. As Abbie Hoffman, one of Seale’s co-defendants, bluntly put it, "the law-and-order apes and this senile dinosaur we call a government have flipped out.”

I appreciated Abbie’s style. Already a radical icon, he challenged middle-class myopia and police state tactics with outrageous theatrics. Busted ten times in one year, he was targeted for threatening the establishment with brilliant insights and pyrotechnic eloquence. He was also a hot property, paid by Random House to sit in an office and write down whatever occurred to him. The reason was obvious: millions of young people like me were buying what he had to say.

His first book, Revolution for the Hell of It, had chronicled a march on the Pentagon and money-burning at the stock exchange, and provided "free advice" on how to make a revolution without spending a cent. Now, with Woodstock Nation, he offered an epic monologue on Chicago, the Woodstock festival, Yippie philosophy, and the growing pains of the new society he envisioned. A manifesto for the emerging counterculture, its irreverent tone left "straight" readers in the dark. But many others got the message.

On the back cover, he brought home the anti-capitalist thrust in a phrase: Steal this book.

Hip to Abbie's drawing power, his publisher rushed the book’s publication within a month of its completion. They were underwriting the raucous reflections of a self-proclaimed revolutionary before his expected martyrdom. Suspecting that his celebrity power might not last long, he seized the chance. A publishing contract, press conferences, even an appearance on The Tonight Show; all were means of propelling the movement.

The Chicago riots had moved thousands from discontent to open rebellion. "The revolution is about coming together in a struggle for change," Abbie explained. "It is about the destruction of a system based on bosses and competition and the building of a new community based on people and cooperation." And he didn't want people to just talk about change. He wanted them to "go out and do it." Oddly, the basic message had something in common with the rhetoric of Barry Goldwater. In 1964, the conservative GOP candidate for president had proclaimed that "extremism in defense of liberty is no vice." To which Abbie now added, "The style of our struggle might look strange, but the spirit is time-honored -- Victory or Death."

Throughout the fall, true believers tried to end the war by “bringing it back home.” In October, rallies across the country called for a “moratorium.” In November, a quarter of a million people converged in the Capitol. But it was hard to keep the faith when the police could storm into an apartment with guns blazing, as Chicago cops did when they killed Black Panthers Fred Hampton and Mark Clark in early December.

The deaths of Hampton and Clark confirmed the prediction of Eldridge Cleaver. The best-seller author and Black Panther minister of information had warned, “A point has been reached where a line just has to be drawn, because the power structure of this country has been thoroughly exposed. There is no right on their side. We know that they're moving against people for political purposes. There's a favorite line of mine. It says that there is a point where fortune ends and cowardice begins. Everybody is scared of the pigs, of the power structure. They come in with their clubs and their guns, and they will exterminate you, if that's what it takes to carry out the will of their bosses.”

As the decade ended, even rock and roll couldn’t provide a refuge. Rolling Stones drummer Brian Jones was found dead at the bottom of a swimming pool that summer, one of the first drug-related rock star deaths of the era. In December, during a Stones concert at the Altamont Speedway in California, fans were beaten and one person was stabbed to death by a Hell's Angel. Another man drowned in a nearby canal and two people were crushed by a runaway car.

And where was the mainstream press as the American Dream turned into a nightmare? Largely oblivious or trapped in denial. Perhaps most owners, editors and gatekeepers were simply too intimidated to level with the country. After all, Vice President Spiro Agnew had accused network television news departments of bias and distortion and urged viewers to lodge complaints. But they needn’t have worried. The government’s main target was the alternative press.

Immediately upon Nixon’s election, FBI Director J. Edgar Hoover had ordered his field offices to “institute a detailed survey concerning New Left-type publications being printed and circulated in your territories on a regular basis.” Along with the Cambodia bombing, another secret war had been declared. Over the next few years, hundreds of alternative journalists were monitored, assaulted, subpoenaed and arrested. Newspapers and radio stations were bombed, burned and ransacked. Government agents not only infiltrated papers, but also spread destructive disinformation.

The FBI was particularly interested in the Black Panthers and their newspaper, a tabloid that reached more than 100,000 readers in the late 60s. After talking with federal agents, their shipper dramatically increased his rates. In 1970, a San Francisco warehouse where back issues were stored mysteriously burned down. But the Bureau wasn’t the only agency involved. From the CIA to the IRS and FCC, the whole federal alphabet worked with local police forces and the White House in what was later exposed as COINTELPRO, a major counterintelligence program designed to disrupt and discredit radical movements and their media.

Since the Bureau reasoned that all dissident groups had “terrorist” potential, almost any tactic could be justified. After President Nixon circulated a plan to expand the operation in 1970, FBI field offices received word to "immediately institute an aggressive policy of developing new productive informants who can infiltrate the ranks of terrorist organizations, their collectives, communes and staffs of their underground newspapers."

Violent harassment by police and vigilantes escalated. Newspaper offices were firebombed in Los Angeles, Milwaukie, and Seattle. In New Haven, the copy editor and other staff of View from the Bottom were arrested on drug charges, a common government tactic. Like many alternative publications, the paper soon folded under the pressure. In Houston, not only was an underground paper called Space City bombed, but also the radio transmitter of KPFT, a new Pacifica station. It was actually bombed twice in 1970, the first recorded cases of a US radio station being blasted off the air. A former Klu Klux Klan member eventually admitted to the crime, but some suspected that the FBI was also involved. Ironically, the attack attracted enough attention and donations to get KPFT back in action by 1971.

And where was the mass media when all this was going on? As far as COINTELPRO was concerned, blissfully ignorant in most cases. Sometimes they even supported the crackdown.

Next: Breakdown at Bennington

Labels: History, Outside + Inside