Enemy of the State 2: Dons of Time Preview

This is part two of an excerpt from Greg Guma's new novel, Dons of Time, available from Fomite Press, Amazon and B&N. "Wherever you look there you are."

After a break for dinner the other members of Harry's collective left the room and the conversation resumed around the woodstove. Now it was Tonio’s turn to explain. He started simply, talking about his early thirties and what he’d learned since meeting Danny Webster, his reasons for accepting Shelley’s offer to chair TELPORT, and, with as much technical language as he could muster, the company’s goals and on-the books plans. His intention was to work up to the secret they had kept for two years. In the process he described Angel, holding back about their relationship, and casually mentioned, without much detail, some of his recovered memories and suspicions about his uncle’s death.

When he finally reached the pay off – the discovery of remote time viewing and his personal pursuit of Jack the Ripper – Harry was less shocked than worried and amused.

“It’s true,” Tonio insisted, uncomfortable being the one who sounded crazy.

“I believe you. The question is, does the Don know?”

Tonio assured him that wasn’t possible.

Choosing frankness over defensiveness, he admitted that he wasn’t absolutely certain, in fact that it was part of his reason for being in Vermont, and that even his oldest friend Paulie might be watching him on Shelley’s orders.

“As long as it’s Paulie I think we’re safe,” Harry said, who’d met him during a ski trip. “But Wolfe Enterprises isn’t what it used to be. That’s why I ask.” Tonio’s frown said: tell me more!

“Daddy has satellites now, three so far. It’s still a young industry, and about five years ago Wolfe Enterprises bought E-Global, which builds and launches satellites and sells images to a wide variety of businesses – agro-cartels, oil companies who need to check on rigs, fishing fleets that want info on the best feeding areas, normal corporate shit. Live stream or images, whatever you want from their cameras in the sky. You just need the bucks.”

He paused briefly before continuing. “The trouble is, they also work with the feds. It’s synergy, a public-private partnership. The government’s satellite operator has a program, NextView, which shares the costs of satellite development with the private sector. From what we know it covered about half the cost of E-Global’s most recent model, GlobeWatch-3. And among its tasks is to provide surveillance for the Department of Defense.”

Harry speculated that Shelley’s takeover of TELPORT might in some way be related to other moves he was making in tech and aerospace. “Fuck man,” he added to hammer his point home. “He could be watching us now, the building at least.”

“But he’s not, right?” This was as good a time as any to make his pitch. “That’s why I need you. Look man, we know remote viewing could be exploited, any technology can be. The Pentagon invented the Internet, right? You told me that. But Danny isn’t doing this for the military or the Agency. He’s just a nerd inventor creating his dream and offering it to the public.”

“With a weakness that’s already been exploited,” Harry reminded him.

“Yes, but I run the company, the RTV end is totally insulated from the other units and anyway, no one knows what happens in Nutley except the three of us – now you. Danny runs the lab, Angel handles operations. What we need is help with strategy and tactics, plus your cyber skills. From what you said I can see that security and prevention need to be a higher priority.”

“Seriously, we need you. I need you. I need someone who has my back. Also someone I can level with, and work with to figure out what went down with Gianni. I’m almost positive it was a hit.”

“At the moment? The CIA and Shelley.”

“Hard to say which would be worse.” Harry leaned back in his chair and took a series of deep breaths, considering the weight and shape of the information. “And what can you do for us,” he asked, “for the movement?”

“Underwrite it?” The lack of response told Tonio that wouldn’t be enough. “All right, how about this? Either we go public with RTV or no one gets it.”

“And if we use it ourselves,” he added, struggling to reflect what Harry might want to hear, “if we do, we use it to get some real truth out there, no matter whose ox is gored.”

“Right on,” replied Harry, pumping a clenched fist in mock salute. “So, where do we start?”

On the trip Tonio had come up with a list that covered the gamut. But now that he was in the cabin, near a warm wood fire, safe and relatively comfortable with a trusted old friend, he didn’t feel like discussing security firewalls at midnight. But he did want to know what Harry thought about his uncle’s death. After briefly explaining the evolution of his suspicions he asked for ideas on what to do next.

To Harry the answer seemed obvious, “Find out what the man was doing that could get him killed.” It sounded like the right place to start. Unfortunately, sleeping with his mother was the first clue that came to mind. 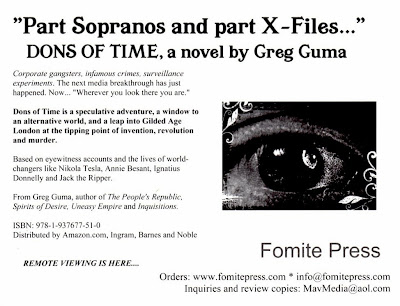