Fragile Freedom in the Big Apple 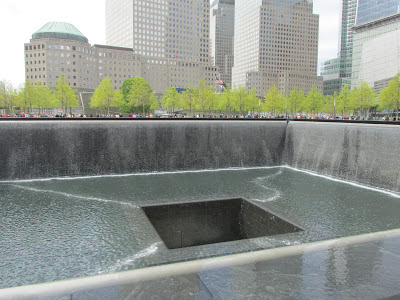 In order to see the 9/11 Memorial in lower Manhattan you must first remove your belt and anything metal, pass through airport-level security, and show your ticket at six separate check points. After making it past all this on a sunny afternoon I did not feel especially free by the time I entered the site.
Still, the Memorial can provoke powerful emotions that tend to eclipse the oppressive experience of being processed, prodded and examined before acceptance. Standing in the wide court surrounding the two pools, built on the same spots where the Twin Towers stood, you cannot help sensing what is missing. Still water circulates below the names of victims, each die-cut into bronze, and then descends the thirty-foot waterfall into a void.
The guide touts it as the largest water cascade in North America. 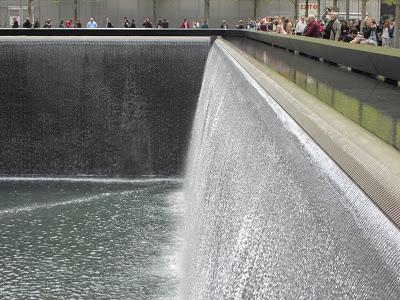 Personally, I was never a fan of the World Trade Center. Growing up in New York before the towers went up, I found them unwelcome ego-additions to the skyline that projected Rockefeller power. Returning decades later, however, the space finally feels like it belongs to everyone who visits.

People stroll slowly around the large square pools, often stopping when they find a familiar name or group of first responders. School classes search for people on electronic directories. Others sit on stone benches to reflect. Eventually the site will include a museum, set to open this fall, office and retail space, and more than 400 newly planted trees. 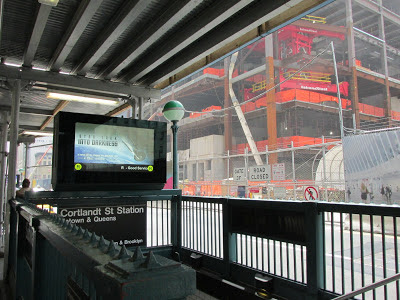 At the moment the surrounding area is a loud and crowded construction site as work proceeds on 1 World Trade Center and other commercial buildings. Large TV screens hawking products, plays and films have been mounted onto subway entrances to lure tourists visiting the memorial. It is also a security zone, watched from cameras and vigilantly patrolled by cops and Memorial staff.

You get a sense that if someone spoke too loudly or uttered any “inappropriate” thought it would take only seconds before an armed team descended and removed them. It’s certainly possible that someone might want to attack such a monument. But doesn’t the same go for many other sites? 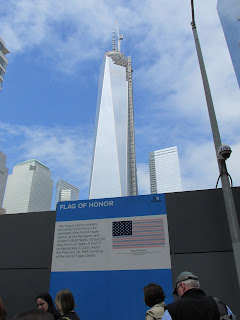 According to a message from Mayor Bloomberg, printed in the official guide, the 9/11 Memorial is supposed to act as both a reminder of loss and a symbol of hope for the future. As a reminder, it succeeds – in both intentional and unintended ways. But as a vision of the future this part of Manhattan currently suggests a more tightly regulated society, one where you are free to mourn -- after submitting to strict authority in order to qualify -- but probably not to question, criticize or protest.

Like Bloomberg, Memorial and Museum President Joe Daniels calls it a reminder – of “what we have endured” and “our ability to come together in the wake of tragedy.” That is clearly true. But visiting also points to some of what has been lost or surrendered since the attacks more than a decade ago. Daniels adds that the recent official opening marked “a new chapter in the history of New York City and the United States.”
At this point it’s still hard to tell how the chapter will end. 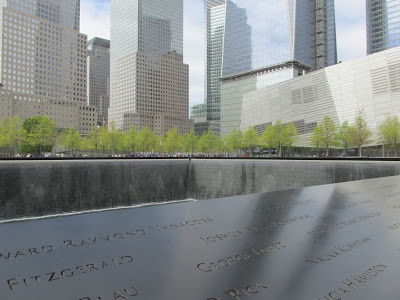