A brief political news quiz, based on research by the Christian Science Monitor.  Match Republican presidential candidates with some of their memorable quotes. Answers below, but try not to cheat. Who says conservatives can't do comedy?
1.On the Occupy Wall Street protests, what upstanding GOP citizen said, “That’s not free speech. That is trying to destroy the greatest nation in the world?”
2. What Republican hopeful said, "We don't need more weapons... We do not need to be the policeman of the world?"
3. On cutting federal agencies, who said "too many chefs not only spoil the broth, they make it inedible and prohibitively expensive?"
4. This one's really good, or at least ironic. Who said "..if you have a good enough leader who's positive enough, they can ignore the other candidates?"
5. This is probably too easy, but who said “I’ll work every day to make Washington, DC, as inconsequential in your life as I can?”
6. Tough one. What hopeful believes “the people want to know your heart and soul, and they can tell if you’re faking it pretty quickly?”
7. What mental giant said, "I’m ready for the ‘gotcha’ questions and they’re already starting to come?"
8. Think hard. Who said, “The judiciary cannot create life, and it did not create marriage, and it has no right to redefine either one?”
9. Discussing liberty, which candidate said "...the question we need to ask ourselves tonight is: Will it end with us?"
10. Which GOP statesman admitted the obvious about Obama with this, “It’s a good issue to keep alive. It’s fun to poke at him?”
11. Another easy one. On legalizing grass, who said, "Having done both I can tell you that marijuana is a lot safer than alcohol?"
12. Finally, what candidate suggested "that you serve your eggs with hollandaise sauce in hubcaps. Because there’s no plates like chrome for the hollandaise?”
Answers
1. Herman Cain, in Nashua, New Hampshire, displacing blame as his campaign imploded.
2. Ron Paul, in Iowa, speaking his own truth to another no-nothing audience. The complete quote: "We have more weaponry than everybody else put together. And if you add up what we have and our allies, we have 70 percent of the weapons of the world. We don’t need more weapons.... We do not need to be the policeman of the world.” 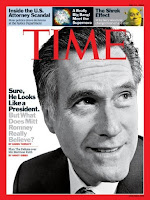 3. Mitt Romney, on the need to combine or reduce the number of federal agencies. Speaking of "prohibitively expensive," Mitt should know.
4. Newt Gingrich, explaining leadership on CNN. Seriously.
5. Rick Perry, before jumping in and proving that he was actually talking about himself.
6. John Hunstman, whose brain may be his biggest problem in the GOP race. (He has one.)
7. Herman Cain. The full quote is a keeper: "I’m ready for the ‘gotcha’ questions and they’re already starting to come. And when they ask me who is the president of Ubeki-beki-beki-beki-stan-stan, I’m going to say, 'You know, I don’t know. Do you know?' And then I’m going to say, 'How’s that going to create one job?'”
8. Rick Santorum. Yes, it is hard to remember that he's in the race.
9. Michelle Bachmann. Another verbatim gem: “For 21 generations, the torch of liberty has been successfully passed from one generation to the next. And the question we need to ask ourselves tonight is: Will it end with us? Will we be the first generation to fail when it is our turn to pass the torch of liberty? Will we allow this great experiment in human liberty called America to end on our watch?"
10. Rick Perry, on whether President Obama’s birth certificate is fake. A moment of unintentional candor.
11. Gary Johnson, pro-pot Republican. It's a big, rainbow-colored tent after all. Full quote: "What I'm advocating is the legalization of marijuana. Having done both I can tell you that marijuana is a lot safer than alcohol."
12. Mitt Romney, explaining how to dine while playing human in a New Hampshire restaurant. The full quote: “I saw the young man over there with eggs Benedict, with hollandaise sauce. And I was going to suggest to you that you serve your eggs with hollandaise sauce in hubcaps. Because there’s no plates like chrome for the hollandaise.”
How'd you do? With characters like these, it's the best reality TV show yet -- Far Right Survivor: Presidential Death Match Edition. Only when you vote these bozos off the island they get speaking deals and corporate appointments.