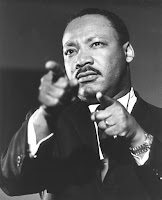 On April 4, 1968, Martin Luther King Jr. was assassinated on the balcony of a Memphis motel as he prepared to support striking Black sanitation workers there. Although James Earl Ray initially confessed to the crime – he later recanted – doubts about what happened persist.

.
In the late 1990s, former FBI agent Donald Wilson, who investigated the murder, presented evidence he claimed to have found in Ray’s car – slips of paper that support charges of a conspiracy involving federal agents. Wilson didn’t produce the evidence earlier, he said, because he didn’t trust other investigators and feared for his family’s safety.

Coretta Scott King and the rest of King's family won a wrongful death civil trial against Loyd Jowers and "other unknown co-conspirators." Jowers, the owner of a restaurant near the Lorraine Motel, claimed to have received $100,000 to arrange King's assassination. The jury of six Whites and six Blacks found him guilty and concluded that "governmental agencies were parties" to the assassination plot.

William Pepper, who represented the King family in the trial, charged that Ray was framed by the federal government, and that King was killed by a conspiracy that involved the FBI, CIA, military, Memphis police, and organized crime figures from New Orleans and Memphis. A friend of King near the end of his life, Pepper also represented Ray in a televised mock trial in an attempt to get him the trial he never had. The results of his investigation are provided in his book, An Act of State: The Execution of Martin Luther King.

Yet, it’s easier, in a way, to accept that King was the victim of a conspiracy than to face other aspects of his life. As Kentucky civil rights leader Georgia Powers put it, “He was a great man – but he was still a man.” Like Bill Clinton, whose record as president was largely overshadowed by relentless investigation of his personal behavior, King was hounded by FBI Director J. Edgar Hoover, who hoped to discredit the civil rights leader by exposing his alleged “womanizing.” Many civil rights leaders dismiss such charges as mean-spirited attempts to sully King’s memory and discredit his achievements.

Georgia Powers certainly had no intention of doing that. On the contrary. She worked closely with King in the 1960s, organizing to end discrimination in public accommodations and employment and pass open housing laws. In 1967, she became that first Black and first woman elected to the Kentucky State Senate, a position she held with distinction for the next 20 years. During her first term, less than a month before King’s death, she spearheaded passage of a statewide open housing bill. After a distinguished career, she passed away in 2016 at 93 years old. She was in her early 70s when we first met in 1997.

.
As she explained then, her relationship with King was more than professional. Her 1995 book, I Shared the Dream, described how their work together led to a love affair that continued until the last moments of his life. Keeping that secret for almost three decades, she went public only after other civil rights leaders released inaccurate accounts of their relationship and the events surrounding King’s death.

.
She was particularly upset by a comment in And The Walls Came Tumbling Down , an autobiography written by Ralph Abernathy, King’s close friend and confidante. Although willing to attribute Abernathy’s repetition of Hoover’s smear to illness and poor memory, she felt compelled to set the record straight. “When Dr. King’s life is researched,” she wrote, “I want the part relating to me to be available in my own words. It is my own history as well, both the good and the bad.”

It began with mutual admiration, she explained, and “progressed into a deepening friendship in which we shared opinions, confidences, and laughed often.” She called him “M.L.,” and he called her “Senator.” But King was under tremendous pressure, and ultimately turned to Georgia for intimacy and emotional support, she claimed. Although they sometimes discussed issues and strategies, his main unmet need was time to let his hair down and set his cares aside.

“Some people called him a prophet, and compared him with Jesus,” she recalled. While she did believe that he was divinely inspired, “I knew Martin had all the imperfections, foibles, and passions of a mortal man.” A meticulous person with an affection for silk suits, he enjoyed laughter and jokes, barbecued ribs and soul foods, not to mention the company of attractive women. In short, she said, “He had a good appetite for life.”

He also had a strong sense that he wouldn’t get to see his visions come to pass. Tired and melancholy one night, he told her, “I’m just as normal as any other man. I want to live a long life, but I know I won’t get to.”

Georgia was in Memphis with King on the day he died. The previous night he’d confided, “I’ve never been more physically and emotionally tired.” On April 4, they waited most of the day to see if a temporary restraining order against the planned demonstration would be lifted. But King was adamant. Regardless of what the court decided, he promised, “We will march on Monday.” When Abernathy asked whether he feared what might happen, King answered softly, “I’d rather be dead than afraid.”

As the meeting broke up and the group prepared for a soul food dinner, King brushed past Georgia on his way out the door. “I’m looking forward to a quiet and peaceful evening,” he said. “Don’t make any plans.” They were the last words he ever spoke to her. Moments later he was shot. 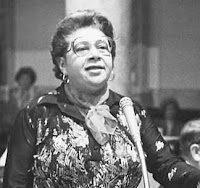 Looking back, Georgia regretted that her actions may have hurt others, especially King’s wife. But despite those feelings, she didn’t regret her decision, insisting that it wasn’t just some tawdry affair. “When we were together,” she recalled, “the rest of the word, whose problems we knew and shared, was far away. Our time together was a safe haven for both of us. There we could laugh and speak of things others might not understand. He trusted me, and I him, not to talk about it.”

As the years passed, however, she became increasingly uncomfortable with the rumors that distorted their relationship. She also realized that her own life, like so many, was full of hidden truths. One was her ancestry. Although she didn’t know the identity of her father’s father, she eventually learned that he was White. Another involved her great aunt Celia Mudd, who was born into slavery but eventually inherited the rural Kentucky farm on which she spent all her life.

.
Eventually, she uncovered most of Celia’s story. The key was a 1902 will in which Sam Lancaster, whose father had bought the Nelson County farm, left it to his most trusted employee – the former slave whom Georgia knew as Aunt Celia. That fateful decision led to a court battle with Sam’s surviving brother. The case went to Kentucky’s highest court, yet most newspapers declined to report about it. A Black woman inheriting more than 500 acres of land from a White man apparently wasn’t considered news. Neither was the fact that Celia Mudd went on after winning the case to become a local philanthropist, admired by Blacks and Whites alike.

Powers and I collaborated on a novel , Celia’s Land,* that explores this forgotten history. During the research I visited the farm on which Celia spent her life. Stepping into the old slave quarters where she was born, I reflected on how much we still don’t understand about that time, when Whites believed Blacks were no more than property. I also thought about how often racism is still ignored, distorted, or downplayed.

Rather than the petty arguments, name-calling and cruel distortions that often characterize political discourse these days, what we need is the courage to face our own and society’s uncomfortable realities – to openly acknowledge them, replace hatred with compassion, and stop accepting convenient myths.
(Original version posted on April 4, 2008; most read post, Jan. 2012)