The Next Level: World Order

Part 24 of Prisoners of the Real

In times of turmoil, we often hear urgent calls for some form of "globalized" decision-making. The argument goes that growth, development, and crises have propelled humanity from the tribe to the village, from there to the city-state, and most recently to the nation-state. The next inevitable step is a world system.

Is it an unrealistic idea? History does demonstrate that uneven growth leads to conflict and war. The renowned system theorist Ervin Laszlo once put it this way:

For many advocates of global decision-making, this suggests two goals: to establish a humanistic world order, and to make the world more stable and orderly. Since it's unlikely – barring a technological meltdown – that we will return to an age of simpler technology, many globalists argue that the only choice, as Laszlo wrote, is to "lift the level of social technics to a corresponding level." In other words, national governments must surrender control to a world-level organization.

This strategy, based on the belief that errors of "scientific rationality" can be counteracted with more of the same, echoes the logic of philosopher Thomas Hobbes. Although rejecting Hobbes' argument that what we need is absolute monarchy, thinkers like Laszlo agree with the basic approach: surrendered sovereignty in exchange for collective security and shared wealth. This is as relevant today in the contemplation of world government, he wrote in Strategy for the Future, as it was in the past to the vision of a rational political order on the national scale. Since both assume that human beings are essentially selfish individualists, pursuing their own goals at the expense of their neighbors, "world order" seems to them only "workable" alternative.

Hobbes' error, said Laszo, wasn't his view of humanity, or his notion of surrendered sovereignty, but rather the lack of an appropriate implementation plan. It must be realistic, practical and possible within an acceptable time frame; that is, before environmental catastrophe or world war make it irrelevant. Like most advocates of world government, Laszlo worked out many of the details, including roles for various members of his ideal global network.

Similiar designs, some arguably more egalitarian, were developed during the 1970s by a blue-ribbon group calling itself the World Order Models Project (WOMP). Among its members were Institute for Policy Studies founder Richard Barnet, Johnson-era Defense Secretary Robert McNamara, and C. Douglas Dillon, a well-connected statesman and Council on Foreign Relations director who chaired the effort with funding from the Rockefeller Foundation. The project's main assumption was that the planet is in dire need of some form of "central guidance," which they defined as a "unified capacity for policy-formation, -coordination and -implementation." State sovereignty, particularly in regard to security and environmental matters, "impedes rational management of these issues areas." National governments are neither responsive to external pressures nor able to protect people from adverse developments, they concluded.

Looking back at the evolution of the world society, WOMP advised that science, technology, politics and social change pull humanity inexorably toward some form of world order. The group's preferred model combined central guidance with "wide dispersion of authority and distribution of power," an apparent contradiction they hoped to see resolved in a transition phase that builds up the role of the United Nations and various specialized agencies. They admitted, however, that other outcomes are also possible, and perhaps more likely.

How might it go? Forced by various crises to assume control over global resources and put down challenges to order, the major nations might eventually impose some form of world government. Another possibility is that regional movements toward economic and political integration could serve as a transitional phase that de-emphasizes national sovereignty while preserving some diversity. The latter is perhaps easier to imagine, based on the late 20th century birth of the European Union, the gradual economic integration of the Americas, and the emergence of the Pacific Rim as a regional power. However, such a regionalist model isn't inconsistent with the less altruistic designs of foreign policy elitists like Henry Kissinger. 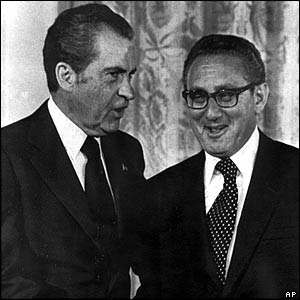 During the Nixon era, Kissinger's five-power variation on the theme of world order gained considerable force. The idea was that the tendency of the current world system to oligopoly (economic control by the few) would be maximized by the main actors: the US, Soviet Union, Western Europe, Japan, and China. Under this arrangement, ideological differences would be minimized and destructive rivalries eliminated, but little would be done to reduce poverty, repression, and violence. This “five-power” plan aimed at intergovernmental management, yet ignored the need for human solidarity and denied the rights of smaller nations and millions of individuals.

Political earthquakes of recent years – the dissolution of the Soviet Union, abuses of presidential power, conflict in the Middle East, the emergence of Europe and Asia as economic powerhouses, and "wars" involving violent fundamentalists – have spurred yet another reconsideration of the existing international order. Despite the tremors, many people hope to simply maintain and enhance the status quo, perhaps with a revised role for the UN and economic decision-making by international financial institutions such as the World Trade Organization. In that case, some form of central guidance could evolve – probably a combination of the Kissinger plan and a regionally-based approach.

Nevertheless, some experts continue to insist that the only solution is either transformation or transcendence of the current world order. Transformation might involve reforming the UN to make it considerably more representative, competent, and powerful. Transcendence generally means replacing the UN with some form of world parliament or a full-fledged world government, finishing with the nation-state once and for all. Though it's hard to imagine, given the widespread suspicion about any form of global governance involving surrendered sovereignty, many theorists – and even few politicians – insist that global problems ultimately will give birth to world solutions.

Next: A Guide to Lifeboat Ethics

To read other chapters, go to Prisoners of the Real: An Odyssey

Interesting blog. Thanks. FYI, there is a growing movement for a global referendum on the creation of a democratic world parliament (www.voteworldparliament.org), and Ervin Laszlo is one of 121 cosmopolitan authors who support this initiative (http://voteworldparliament.org/allies-initiatives/authors-campaign/). Democracy is governance with the consent of the governed, so a successful global referendum must be the foundation for any world system. So far, we have 13,200+ votes, and voting is about 92% in favour ... but we're just getting started.

Couldn't agree more. Something needs to happen, best for it to be a planned something.