Prisoners of the Real: Chapter 18

About a century ago the Western world entered an age of artificial substitutes, technical ingenuity, mechanical products, technological values, and accelerating motion. The watchword of that age was objectivity – a highly illusive standard for both leaders and the led. In particular, the notion of objectivity deeply affected the emerging mass communications industry, which before long was serving as one of the most powerful tools of global social management. 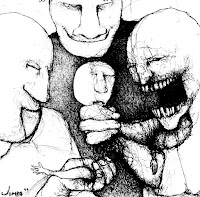 In the 19th century news had been an open ideological weapon; opinions splattered across most printed pages. But the modern media age brought with it a new "best practice" – objective reporting. Based on the contention that "rational people" could discover the truth if presented with enough unfettered facts, objectivity became the largely unexamined goal of the professional press. In 1947, however, the Commission on Freedom of the Press concluded that it was no longer just a goal. It had become a fetish.

By the end of the 20th century the festishizing of apparent "facts" was viewed as a serious media problem, fed by both print and electronic media. As journalist Mark Harris put it, "Only hard data are useful to the press. Unable to negotiate meditation, the media turn it off. Reporters cannot believe things they cannot instantly absorb, jot down, add up and phone in."

In the words of TV's most famous FBI man, Jack Friday, like a good cop, a good reporter -- or a rational leader -- supposedly wanted "nothing but the facts." That many of the so-called "facts" turned out to be false, incomplete or inaccurate, and that objectivity itself was an impossible standard, seemed not to matter at the time.

Humanity was still turning outward then, toward the "objective," and upward toward increased “order,” through scientific methods and expanding bureaucratic organizations. The dream of the new world, at first sounding much like Rousseau's vision of a naturalized community, gradually became a very different reality -- centralized, regimented, and predictable. For a while, nevertheless, human relations and behavioral engineering were effective tools used by many leaders to turn people into more easily conditioned extroverts.

New materialist assumptions replaced the idea of a "rational soul" with a "tabula rasa" upon which society's managers hoped to write. The term "tabula rasa" was introduced by John Locke in 1672, just as a new English middle-class was disposing of the divine rights of kings. Rejecting Descartes' theory of innate knowledge, Locke traced it instead back to sense perception. We begin, he said, as blank slates, without general principles. After birth external stimuli imprint themselves upon the mind. Locke applied Newton's mechanistic view of the world to the theory of knowledge:

"Let us then suppose the mind to be, as we say, white paper, void of all character, without any ideas; how comes it to be furnished? Whence comes it by that vast store, which the busy and boundless fancy of man has painted on it with an almost endless variety? Whence has it all the materials of knowledge and reason? To this I answer in one word, from experience; in that all our knowledge is founded, and from that it ultimately derives itself."

Combined with dialectical materialism, Locke's hypothesis found wide support in the 20th century. The conditioned reflex –- training to respond to a given stimulus in a predetermined fashion –- was a shaping mechanism that, according to psychologist J.B. Watson, confirmed that the human being is "an assembled organic machine ready to run."

The tools of operant conditioning soon developed by B.F. Skinner rested upon a related assumption: that the "living organism" we call a human being functions faithfully in response to externally administered stimuli. This gradually conferred on our leaders, as the self-selected programmers for these living machines, the new status of cultural designers. There was a downside, however. The rest of humanity was consigned to a slavish extroversion that removed the individual search for truth and the highest good from view.

The other-directed person, as David Reisman described him in a seminal study, The Lonely Crowd, is the model for the salaried worker or bureaucrat in any metropolitan area, "torn between the illusion that life should be easy, if he could only find the ways of proper adjustment to the group, and the half buried feeling that it is not easy for him." Reisman documented how the shift away from agriculture and the growth of habits of scientific thought caused religious feelings to give way to rational, often individualistic attitudes.

The centralization and bureaucratization of society, in turn, increased awareness of and sensitivity to other people. The result was Fromm's "marketer," Mills' "fixer," Arnold Green's "middle class male child." Other-direction insured social conformity and, therefore, apparent comfort in one's peer group. Rational extroverts care very much what others think of them. Being liked is the chief area of concern:

"What is common to all other-directed people is that their contemporaries are the source of direction for the individual – either those known to him or those with whom he is indirectly acquainted, through friends and through the mass media. This source is of course 'internalized' in the sense that dependence on it for guidance in life is implanted early. The goals toward which the other-directed person strives shift with that guidance: it is only the process of striving itself and the process of paying close attention to the signals from others that remain unaltered throughout life."

The other-directed person is also often a model rational manager, someone who believes that everyone is a customer, and all of them objects of either conciliation or manipulation. Jung described this kind of person as an extrovert psychological type of either the thinking or feeling rational variety. As leaders they are object-oriented and dedicated to "given facts" and the status quo, never expecting to find absolute factors in their own inner lives. Everything they know is outside themselves, their guide is external necessity.

Such a consciousness, said Jung, looks outward because that is where the essential and decisive determinant is found. No serious attempt to overreach "current facts" is made, since such facts are a source of almost inexhaustible fascination.

Conveniently, the moral standard of the modern leader coincides with the demands of society. Above all, such a person is adaptable. Yet adjustment to the "objective" situation, the demands of the immediate environment, isn't merely adaptation. The factual fetishism of rational managers also traps them in short-range planning and bans most considerations beyond the observable, anything that lies outside the immediate conditions of time and space. Instead, they do only what is expected.

In most modern societies, leaders and managers have become a new class, a covert cult of ascensionists. For these committed strivers, the highest person represents the utmost in power, authority, and sometimes intelligence. But as Lewis Mumford noted, those who look upward and outward, moving across vast distances at rapid speeds, often forget to look downward and inward. Both self and Earth are sacrificed in a quest for order and control, and the rejection of the inner self becomes the curse of our age.

The dominance of purely rational habits of thought in almost all areas of life has also given theories the veneer of absolute truth. Despite the limits of perception, we struggle for certainty about the small bits of knowledge we hold. Our spirit of logical inquiry is too often a journey to eradicate doubt and establish doctrine. Once a hypothesis has been verified, the next step is to corroborate, refine and disseminate it. In this way a variety of flawed and false theories can attain the status of law.

A significant example is the behaviorist hypothesis that the only elementary function of the central nervous system is reflex. To verify this, only experiments that registered responses to "change" were conducted. According to ethologist Konrad Lorenz, these experiments were executed in a way "that precluded their revealing that the central nervous system can do more than react passively to stimuli." He concluded that "the Skinnerian has no right to comment on innate behavior or on aggression, because he cuts it from consideration."

Nevertheless, that belief system has spread. Despite its blind spots, the Skinnerian view has made a deep impact, almost becoming an item of faith. The simplicity of the reflex doctrine, along with the apparent exactitude of related research, has led to considerable acclaim. In Civilized Man's Eight Deadly Sins, Lorenz noted:

"Even religious believers could be converted to it, for if the child is born as a 'tabula rasa,' it is the duty of every believer to see to it that this child and, possibly, all other children, are brought up in what he believes to be the only true religion. Thus behavioristic dogma supports every doctrinaire in his conviction."

Behaviorism is basically the doctrine of human as mechanism restated as a democratic principle: all of us are created potentially equal -- blank slates without instinct, and would be equal under the same external conditions. The threat to democratic order, therefore, is the "myth" of the inner being, which suggests the existence of differences in social need and response.

Most leaders generally accept such mechanistic ideas, moving their communities and organizations toward increased predictability. But in order for such so-called rationality to function as the central operational principle, people must be unresisting objects. The rulers of the modern world may disagree about ideology or economics, but they have apparently reached a consensus on at least one matter – that the conditioning of humanity is highly desirable. The social contract, in the US and elsewhere, may have been initiated with ideals such as life, liberty and the pursuit of happiness. But it has been amended considerably over time, leaning progressively and dramatically toward order and uniformity.

Judging from the higher degree of extroversion in developed societies, and the popularity of analysis and superficial certainty, mass indoctrination has been remarkably effective. But classification without reflection upon whole systems can be dangerous; this approach is easily prey to reductionism. It smirks at attempts to increase knowledge without quantification or operational research. The filter of measurement becomes the only accepted standard.

To look at and work with human beings is this manner, however, one must accept a dehumanized view of consciousness. Along with that comes repression and self-censorship -- of subjective experiences, impulses, instincts and other challenges to "reason."

Skinnerians proclaimed that the "autonomous" human was dead, replaced by conditioned and conditioning humanity. What they thought we needed was more objective, exacting research to push back the decimal places that measure the "real world." But humanity's half-buried instincts have not completely disappeared. This adjusted life, they still remind us, is not bringing us closer to the highest good, the "summum bonum," and may instead be moving us farther away.