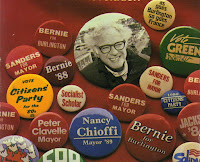 In the early 20th century the nation’s progressive movement attempted to control concentrated wealth and widen democratic participation. For a quarter century, reforms addressed workers’ rights, monopoly excesses, political corruption, uncontrolled development, and the impacts of the early industrial era. In the process, many people got relief from the worst effects of uncontrolled capitalism, a considerable accomplishment. Yet, most of the efforts quelled popular discontent rather than producing basic changes, and the resulting reforms were often co-opted by business groups to serve their own long-range interests.

The same can be said of the recent progressive era in Burlington and, by extension, Vermont.On March 3, 2009 voters in Burlington chose a mayor. Incumbent Bob Kiss, the third progressive to hold office over the last 28 years, defeated Democratic, Republican, Green and Independent challengers. To put the election into perspective, this eight-part essay looks at the movement that began with the election of Bernie Sanders on March 3, 1981 and subsequently changed the face of Vermont politics.

Chapter One: The Sanders Revoluton