From the start Kristina Berster’s case was handled with an eye for its propaganda value. She gave no statements and just one pre-trial interview, yet US officials and outlets felt free to label her dangerous, capable of virtually anything if released on bail. Even in the hands of expert jailers, they suggested, the risks were real and large.

Initially, most journalists presented the official version without asking many questions. After all, some of the government's actions did appear to support it. Why else the unique security arrangements, the high bail, a 24-hour guard for the judge, metal detectors, and armed officers on the courthouse roof? But the security was so intense that local reporters eventually began to focus on that. In most of the country the mere threat of terrorism was convincing enough to make any precautions sound reasonable. But once some Vermont journalists directly observed the defendant, a small, fair-haired woman with a mild demeanor and open smile, the security procedures began to look like overkill.

As the coverage began to shift and some reporters reconsidered their early assumptions, the general public also began to give the case a second look. Reports described Berster as a fugitive, an activist, or simply as a West German charged with border violations. Some headlines referred to her on a first name basis. Yesterday's terrorist was beginning to look like a human being, one who might even be innocent -- at least of a terrorism charge.

Favorable coverage, with headlines like "Berster Says She Wanted to Start a New Life Here," did not mesh well with the scenario mapped out the previous July. But the intelligence community had other ways to reinforce fear and justify their position. On the day Kunstler tried to subpoena FBI Director Webster, for example, a "confidential memorandum" was selectively released by the Burlington Police Department to UPI. New information had been forwarded to the police by the US Marshall, who apparently received it from the Bureau.

The memo warned that two Colombian terrorists were expected to attend the trial, and potentially disrupt it. Security throughout the city was tightened, and experts flew in from New Orleans and New York. The latest "threat" hit the press simultaneously with the Webster subpoena, reinforcing the idea that foreign terrorism loomed over the Green Mountains. But nothing and no one materialized. 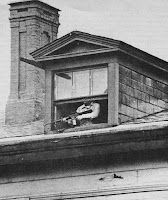 That ploy was small potatoes when compared with the "simulation" staged the following week: A live-action terrorist siege, complete with bank robbery, hostages and a SWAT-style police unit called the Threat Management Team. Just as Kristina took the witness stand for her third and final day, the performing "terrorists" made their escape from the Chittenden Bank and fled to the Follett House, an historic building overlooking the city's waterfront. This photo was taken during the “exercise.”

Local "threat managers" arrived promptly, provoking "fire" from the "terrorists" as bewildered bystanders tried to understand what was happening. Was it real, or had they stumbled on a new action movie in production?

Police fired convincing blanks as the “terrorists” held their hostages in the cupola of the old building. Negotiations between the cops and robbers continued into early afternoon, following the common real-life pattern. The bad guys were ultimately "talked out." But by this time news of the exercise and attendant media coverage had reached the courtroom.

Judge Coffrin was "fit to be tied," said a clerk, and warned jurors to avoid all news media that evening – especially TV.


At 6 p.m. Bill Felling, a newsman with the local CBS affiliate, read his account of the siege. The tone was light, but he labeled the event a "terrorist" exercise. The coverage included action-packed footage, made possible by the advance warning provided to the area's largest TV station.

The previous evening a WCAX reporter had taken a call from Sergeant Kevin Scully, a local specialist in security. Scully provided the tip that the station could get a great story if a camera crew showed up at precisely 10 a.m.

Once Felling finished his report, anchorman Mickey Gallagher turned to the next item – the Berster trial. Juxtaposing a "terrorist incident" and the trial of a "suspected terrorist" was as reasonable as it was tasteless. The local daily newspaper followed suit. The next day the B-section of the Burlington Free Press carried four prominent photos of the "siege" beside two Berster stories. The main head, "Berster Testimony Refuted," described not only the court action but the impact of the media event.

I no longer needed much to stimulate suspicion by this point. Those sympathetic to the defendant were obviously being watched. There had even been an unsolved break-in at the house being used by the Defense Committee. When I flew to New York to speak about the case or conduct research, the first familiar face in the airport terminal was usually a US Marshall who handled security at the trial.

"What brings you to the city?" I asked as I passed him one day. "Just waiting," he mumbled.

Many of Berster's supporters quickly came to believe that the Follett House siege was purposely staged to coincide with the trial. But it might also be an unfortunate coincidence. To find out which, it would be necessary to follow the advice Deep Throat gave Watergate reporter Bob Woodward: "Follow the money."

The trail began with then-Sergeant Scully, the local cop who turned up whenever activists gathered. He denied what he could, and claimed that the date of the event was determined locally. But that contradicted the normal protocol, in which the US Army Corps of Engineers set the date.

Scully did admit at least one thing: there had been a last-minute change in the timing. Originally, the siege was set for July 20, but was canceled due to "conflicting commitments" of local team members. It was already sounding fishy. Berster had been arrested four days before.

How was the final date selected? Scully claimed that decision was made in August. But Colonel Patrick Dalager, Provost Marshall of the New England Corps of Engineers, remembered it differently. "They scheduled it during the first week in September," he recalled. As the person who ran the training, he was in a position to know. Dalager was an FBI academy graduate and co-author of the Army's manual on "terrorism directed against the military." His basic argument was that local police agencies were the only means of protecting Army Corps projects from vandalism, terrorism, or other kinds of violence.

Dalager was candid about the funding source, although he insisted that the juxtaposition of the exercise and the trial was purely coincidental. The money, he explained, came from the Law Enforcement Assistance Administration (LEAA), which had been funding programs to protect corporate facilities from potential terrorists since the early 1970s. LEAA also managed the computerized storage of intelligence information, helping to end a long tradition of federal non-involvement in local law enforcement.

And so, LEAA, part of the post-COINTEL "terrorist control" network, provided seed money for the siege, enlisting local police to play terrorists for the local press. Meanwhile, the FBI leaked rumors of a possible terrorist attack by South Americans. The casual consumer of news might well assume that the two were related. And if not, the mere threat of violence was enough to justify intensified security measures.

How far did it go? Was the FBI's terrorist simulation a device to reinforce the anti-nuclear terrorist scenarios being promoted by LEAA and their private sector partners? Was anyone who defended Kristina considered a potential terrorist by association? Did anti-terrorism preparedness include manufacturing threats? That wasn't possible to prove, but reports of surveillance and infiltration were accumulating across the country.

In any case, Burlington reality was being skewed by the government's terrorist narrative. Like the scare created by Orson Wells' War of the Worlds, the local "siege" looked authentic enough for some people to complete a circuit of fear and suspicion. The Berster case was certainly real, the FBI did claim she was a terrorist, and the local media said terrorists were on the way to town. So, why not a violent robbery and hostage taking?

As the list of coincidences grew, the government's ability to mold mass perceptions looked more formidable than ever. Yet not all the media was playing ball anymore. Immediately after the verdict, one daily paper ran an editorial in support of Kristina's plea for political asylum. Another printed an ironic cartoon. These breaks with conventional wisdom, despite planted stories and disinformation, reflected a basic change in attitudes. Originally, most newspapers reported news about Kristina Berster as if she was guilty before trial. Now they were telling a different story.

In the editorial cartoon, Berster stood before Judge Coffrin. The caption had the judge saying, "Will the dangerous terrorist – I mean, the defendant – step forward and tell the court why she can't get a fair trial." It was an apt satire, but at this stage not enough to counteract months of disinformation.