Prelude to a Revolution 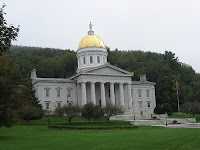 Vermont before the People’s Republic, Haiti under Baby Doc, and how the FBI manufactured a terrorist scare

Chapter One: Heart of the Problem

The suits were out to get me. I could see them, a gaggle of political appointees who headed various state agencies, conferring behind a glass wall at the other end of the floor.

We were in Montpelier, Vermont’s capital, putting together a massive application for federal revenue sharing funds. My job was to coordinate the researchers and writers, pull together the available data, and provide enough boiler plate language to assure approval. Their job, apparently, was to divide up the money without regard to what communities around the state wanted – or my staff discovered along the way.

When I pointed out the disconnect between the analysis and their plans, the head of the new Office of Manpower services ordered me to stop talking to the locals and asking inconvenient questions. When I didn’t comply and started circulating critical memos, he and his agency buddies decided I would have to go.

It was August 1974, the end of a whirlwind year. My partner and I had moved to the Champlain Valley and enrolled at the University of Vermont the previous summer. She was finishing her bachelor’s degree. I had entered the graduate program to study administration and planning in the College of Education and Social Services. At the same time I was Research and Development Director for Champlain Work and Training Programs, a statewide non-profit with Department of Labor contracts. And, because I could listen, conduct an interview and write grants, the head of Champlain Valley W&T frequently farmed out my services to school systems and other groups he hoped to woo.

The boss was a retired businessman from St. Albans, a small, buttoned-up city near the Canadian border. He knew how to organize an enterprise, build a budget and tell the feds what they wanted to hear. A straight talking guy with a 50s white crew cut, he had little respect for political hacks, and some of them felt the same. Still, he knew how to meet federal guidelines, so they treated him with grudging respect.

After three years with his organization, I’d arranged to run a statewide operation on my own, a Department of Labor-funded “new careers” project designed to create para-professional jobs within the Social and Rehabilitative Services system. The idea was to identify the needs, find qualified people, and subsidize their wages while providing training and education that would help these new “Case Workers Aides” keep their jobs once the project ended. It was pretty ambitious and hadn’t been tried before.

By Fall I’d recruited a staff, negotiated with SRS, and arranged for accredited courses with colleges around Vermont. Since some of the money went to the University, the school provided space in the College of Education’s research office. I was a graduate student, but also a project manager with people to supervise and interns across the state. It was my most challenging work to date.

Over the next year I studied harder than at any previous time in my life. Courses in planning, research methods, counseling, and ethics led to the latest theories in management and human services. But I went well beyond the required reading, soaking up anything I could find, particularly political science, philosophy and history. I needed to make sense of what I’d experienced so far, and knew my situation provided a unique opportunity to compare theories with how organizations worked in the real world.

The project went well. More than 20 people got jobs in the social services system. Most also completed courses and received college credits by documenting their life experiences. It was an early attempt to make skills and knowledge acquired outside classrooms credit-worthy. By the following summer my crew was developing a follow up project, applying the tools and process we’d developed to emerging jobs in mental health.

Meanwhile, I used my management role to test some ideas about how people could work together effectively without relying on traditional, control and hierarchically-oriented crutches. A new perspective was taking shape. The idea that managers can only succeed if they’re ethically-neutral, objective professionals who rely exclusively on “rational” tools looked increasingly antiquated and dangerous. I rejected the basic assumptions – that managers and other leaders must be predictors and controllers of behavior, and that organizations are essentially machines.

For several hundred years most humans had believed that nature was nothing more than a complex mechanism, a machine whose secrets we would eventually unlock, I argued in my master’s thesis. We considered ourselves the “lords of nature,” destined to control the cosmic factory. We extended our quest to the very heart of matter – and smashed it. But we were wrong. Atoms aren’t solid, nature isn’t a machine, and the universe can't be divided and dissected without the gravest of consequences. Domination of nature had led us to a dead end, just as domination of humanity had brought misery, poverty and the devastation of most of the world's peoples. The legacy of our mistakes was insecurity and alienation, war and waste.

At the heart of the problem, I concluded, was the set of values underpinning life in the developed countries. A desire for endless material advancement, the basis of our addiction to growth, prevented us from setting limits or ending the domination of nature to suit our current fancy. Yet that’s what it would take. In essence, we had to transform our way of life, turning away from accumulation and toward sustainability:

“Our old approaches – rationalism, competition, inventions and invasions – will leave us with nothing but a deadened, artificial world. If we want to save the planet, therefore, we must turn from the mechanical to the creative, from Apollo to Dionysus, from domination of nature and human beings to cooperation with both nature and one another.”

Next: The Dionysian Alternative

Labels: Outside + Inside, Vermont

We've sort of been here before. Maslow was making the same type of comments in the late sixties.

Not before. At that same time, as I try to show.