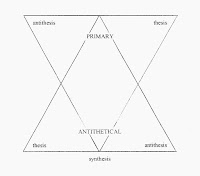 Part 16 of
Prisoners of the Real

Despite the tendency of some 19th Century thinkers to read their own anti-Enlightenment views into the works of Leibnitz, Kant, Hegel and Neitzsche, each of these philosophers to some extent sympathized with the basic intentions of the Age of Reason. Hegel, for example, wrote vitriolic attacks on Christianity as a youth, at least in part because it opposed Enlightenment ideals. His stated goal was to intellectualize romanticism and spiritualize enlightenment.In his second work, The Life of Jesus, he used Christ to propagate Kant's ethics. "Pure reason," he wrote, "incapable of any limitation, is the deity itself." Hegel's Jesus rejected faith and accepted no authority but reason. In later years, Hegel criticized what he viewed as the romantic cult of intuition, and attacked Fries' philosophy of feeling, which suggested that all reality has an inner spiritual side as well as an outer material aspect.

Although he eventually did turn against the negation inherent in the Enlightenment view of religion, Hegel remained faithful to reason, accepting the "truth" according to Plato, Aristotle, Descartes, and Kant. At the core of his own doctrine was Kant's Critique of Pure Reason. All knowledge begins with experience, argued Kant, but it doesn't come from experience. The capacity to have experiences of, let's say, a spatial and temporal character is an a priori possession; the occasions for use of such capacities are a posteriori factors. And the interplay of the two produces knowledge. Central to all activity, including perception, is structure. Kant provided four possible structures for thought – the categories of quantity, quality, relation, and modality, the threads by which the self binds all experience together. Each of the structures, in turn, have three manifestations. Quantity, for example, is manifested as

Hegel adopted many of Kant's ideas, including his abhorrence of the irrational. The cosmic process, he proposed, is directed by a rational principle personified by World-Spirit, or Geist. Whatever is rational is real, he argued, and whatever is real is rational. Geist is universal reason moving through eternity; not simply soul but a totality of all experience, the Absolute or Idea:

"If we propose to think of the mind (Geist), we must not be so shy of its special phenomena....It is wrong, therefore, to take the mind for a processless 'ens', as did the old metaphysic which divided the processless inward life of the mind from its outward life."

Rather than appealing to mystical insight, Hegel relied on strictly rational procedures, and believed that the concept of mind could be defended only by carefully thinking about mind. This scientific approach led him to the transcendental ego, an underlying rational principle of consciousness, the will behind all practical reason and action. The experienced fact of Geist, presented and reconstructed through categories borrowed from both Aristotle and Kant, was a dynamic system of forms – quantity, quality, substance, causality, essence, existence, and so on, all revealed as the Absolute progressively unfolds itself. Hegel's Encyclopedia was a digest of thought, an ordered sequence of categorical items that provided a rational explanation of Geist.

To present his categories, he outlined the procedure he called dialectic, and said that it governed both thoughts and events in the temporal realm. Taken from the Greek word for discussion or debate, it was essentially the theory of the union of opposites. For Plato, dialectic was the art of discussion that arrives at truth by exposing contradictions and overcoming them. For Hegel, however, it was at the core of everything, the sole vehicle for progress. Thesis affirms a proposition, which antithesis denies or negates; synthesis enfolds the truth of both and moves humanity closer to reality. But synthesis, argued Hegel, is also limited, and therefore the triangular process is continually repeated. Conceptualized in this way, dialectic is a process of conflict and reconciliation in thought and time.

Hegel's philosophy was a restatement of older formulae such as matter-form-consciousness and body-soul-spirit; however, his magic triangle – being-nothing-becoming, which adopted the Pythagorean symbol of certainty and power, assumed continuous change. The triangle, sitting on its base, was also the Egyptian emblem of the Godhead, and generally signifies creative intellect, the yearning for higher things, the female element, movement from the material to the spiritual, and the wisdom inherent in nature. Turned upside down, on the other hand, the triangle becomes a symbol of the search for truth within nature, and takes on a male character. Hegel's dialectic therefore linked Greek thought, mathematics, and a variety of religious myths.

Even the poet W.B. Yeats, who hadn't read Hegel before developing the conceptual system he presented in A Vision, viewed the world as a conflict of "spectre and emanation," illustrated by "primary" and "antithetical" cones that matched Hegel's triangular reversals. "By the antithetical cone," he wrote, "we express more and more...our inner world of desire and imagination, whereas by the primary...we express more and more...that objectivity of the mind which is external to the mind...not coloured by opinions." (See the triangular reversals posited by Hegel and Yeats in the graphic at the top of this essay.)

Hegel's belief in change led him to challenge the conflict of affirmation and denial made by formal logic. The truth and purpose of one phase of development, he argued, will be realized in a later stage. Thought must therefore consider things in connection with their histories and relations to other competing thoughts. Knowledge seeks the whole – totality or truth, he said, but never reaches it.

Using his dialectical process, the philosopher examined Geist as it realized its end through civilizations and great personalities. The Idea moves through time, he believed, with neither assertion nor opposition achieving a complete victory at any point. Yet he believed that it reaches its highest self-realization in art, religion, and philosophy. Through art the infinite becomes visible, in religious symbols it becomes more than art, and in philosophy is it mastered by thought. For Hegel philosophy was the goal of all development – mastery of the infinite through rational explanation.

But his reliance on dialectic was self-defeating, since change was considered an attribute only of Geist. Nature, on the other hand, was seen as a self-repeating cycle that induced feelings of ennui. The unity of nature was gone, and it struggled to regain self-identity in humanity, defined as its goal. Thus, human beings, including Hegel, were trapped by reason into a dialectical routine, straight-jacketed by rationality into a linear exposition that eventually became monotonous.

According to Hegel, the endless struggle for self-identity has three stages – mechanics, physics, and organic life. Geist also has three – the subjective, objective, and absolute. But only the absolute, he concluded, has complete reality, or reason; the whole, and nothing else, is completely real. The only solution is for all human beings to join together and form the "divine Idea" as it exists of earth – that is, to create the State. The State, he argued, is the larger and fuller expression of the individual, the only way for people to achieve self-realization. Humanity is therefore urged to accept the laws and customs of the group, and to subject individual conscience to universal reason:

"The State is Mind, per se. This is due to the fact that it is the embodiment of the substantial Will, which is nothing else then the individual self-consciousness conceived in its abstract form and raised to the universal plane. This substantial and massive unity is an absolute and fixed end in itself. In it freedom attains to the maximum of its rights: but at the same time the State, being an end in itself, is provided with the maximum of rights over against the individual citizens, whose highest duty it is to be members of the State."

Within a century, Hegel's dialectic served as a philosophical springboard for both proletarian radicalism and conservative nationalism. Ignoring his hints at transcendentalism, both revolutionaries and patriots turned his system into an oracle of submission to absolute order, a way to bind the complexity that was already producing ennui. In the 20th century, system theorists applied his notion of the "union of opposites" to all entities, rarely questioning the identification of the "real" and rational as Geist.

Sadly, synthesis was beyond Hegel's personal limits. In his later years he moved from the condemnation of Christianity to the celebration of its dogmas as philosophical truth. Illustrating his dialectic in motion, his personal pendulum swung from one extreme to another. He was trapped in an ennui expressed not in the self-repeating dialectic of nature (Evolutionists have since documented that novelty and purposive adaptation occur within all living systems), but in the era spanned by his 61 years of life. The energy of the Enlightenment had gradually eroded into routines, and a marsh gas of boredom and vacuity settled at the nerve endings of social life.

Born two years before the publication of Diderot's Encyclopedie, before the French Revolution and the Napoleonic extravaganza, Hegel lived through a deeply enervating period of change. In the first decades of the 19th century time itself accelerated and human experience crowded in, followed by a long period of statis dominated by repression and the gradual expansion of civilized order.

The line of reasoning that had brought the philosopher to propose the fuller existence of Geist in organization – that is, the coordination of the individual -- was this: to be free is to be self-consciously self-determined, not only in one's actions but in choices. The self, however, is not one's physical nature – feelings, impulses and desires – but mind conceived as rational thought. And thought is governed by laws of reason, a system determined by the nature of reason. Thus, the only free person is one who chooses in accordance with reason. Yet rationality doesn't guarantee self-government, since many individual actions are determined subjectively. The objective basis that is needed to guide actions can be found only in laws and institutions, and only when they are properly organized as embodiments of the laws of reason.

Within a decade of his death in 1831, Hegel's approach was given a practical test in Prussian politics. While conservative Hegelians argued over interpretations, leftists enriched the revolutionary potential inherent in his identification of the rational with the actual. Hegel, of course, had confined himself to considering the past, which he believed to be the philosopher's proper task. "Philosophy comes too late to teach the world what it should be," he wrote. "The owl of Minerva begins its flight when the shades of twilight have already fallen." But Karl Marx disagreed. The function of philosophy, he said, wasn't merely to define and analyze the world but also to change it. For this work, dialectic proved to be a highly flexible instrument.

Next: The Ultimate Reality of Karl Marx

To read other chapters, go to Prisoners of the Real: An Odyssey